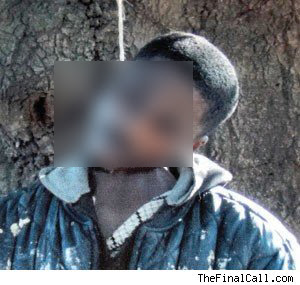 Touch not my anointed and do my prophet no harm, so says the scripture. But in the life of popular preacher and apostle of the most high, Rev Michael Ejeh of Methodist Church, Nigeria, Otukpa Diocese, this divine injunction came to nought as his body was discovered, tied to a tree five kilometers away from a church premises. He was discovered very dead.
Investigations revealed that the late cleric had travelled to Odebe, a village in the area for deliverance.

Wife of the deceased, simply identified as Charity Ejeh, said her late husband suffered from malignant hypertension and had gone to see one Prophet Moses Ujah for deliverance where he met his untimely death.
According to the bereaved woman, they discovered her husband’s body tied to a tree after he had gone to ease himself.
Another source disclosed that Rev Ejeh after prayers on the fateful  night, decided to spend the night in Odebe as it was late for him to  return to his village in Ago.
Village Corner however gathered that his host, Prophet Ujah had kindly agreed to accommodate him and thus directed two of his pastors to sleep with him at the ministry’s office.
It was gathered that in the course of sleeping in the church, his lifeless body was found tied to a tree.
Late Ejeh’s body has since been deposited at a mortuary in Otukpa while his diocese has commenced action to unravel the mysterious death of their pastor by inviting the police to arrest Prophet Ujah.
Meanwhile, the police spokesman has denied any knowledge of the incident, adding, “I have not been briefed by the DPO yet”.
Previous Post