My aim is to play until I cock 40 – Thiago Silva

Injury rules out Troost-Ekong from Algeria’s Team B clash

by Ben Idah
in Education

Receiving the august visitor Arc. Sunday Echono welcome and expressed gratitude to the Governor for sparing time out of his tight schedule to be with them at TETFUND. 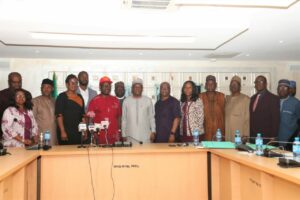 He assured the Governor of the agency continues partnership with relevant bodies such as state government with huge interest in the running of state universities and other institutions of higher learning with a view to justifying federal government trust and confidence in the delivery of it’s core mandates.

An elated Soludo informed the Executive Secretary of TETFUND that he was in TETFUND to solicites for collaborative synergy and Intervention of the federal government education prime agency to enable his government at the state level prosecute his loudable education reform currently ongoing at the state.

The professor of Economics express delight and satisfaction over the sterling leadership qualities and unprecedented performance of the TETFUND Boss since he assumed office six months ago, he emphasize that the in house cleaning and the anti corruption fight been championed by him at the agency should be encouraged for effective service delivery.

He added that the contributions of TETFUND over the years and under president Muhammad Buhari in the development of education especially infrastructures, research, training and capacity building of staff of tertiary institutions can not be over emphasized.

The Governor called for greater synergy, partnership and intervention between TETFUND and Anambra State government in order to turn around the fortune of education in the state.

Climax of the visit was the presentation of branded TETFUND bag which was promptly followed with a group photograph.

2023 Elections: How to check your name on INEC voter register

My aim is to play until I cock 40 – Thiago Silva

Injury rules out Troost-Ekong from Algeria’s Team B clash