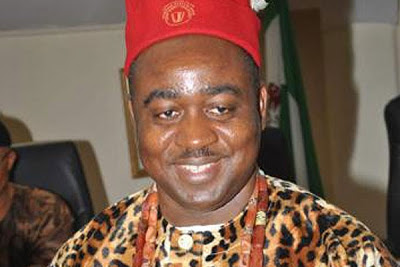 A POLICE officer attached to the Government House Gate, Makurdi, simply identified as Gbenga, yesterday assaulted the Chairman, Nigeria Union of Journalists (NUJ), Benue State Council, Chris Atsaka. Gbenga publicly flogged Atsaka with horsewhip, even as he ran to the Government House Press Centre for safety.
The incident, which attracted the attention of members of staff of the Special Duties Office and that of the Office of the Special Adviser to Governor Gabriel Suswam on Media and Public Affairs and members of the correspondents’ chapel, threw the people into confusion.
Narrating his ordeal to his colleagues amidst tears in Government House Press Centre, Atsaka explained that he was at the State House on official invitation by the Chief of Staff to Governor Gabriel Suswam, Prof. Saint Gbilekaa.
He said his visit was to deliver another letter to the Chief of Staff over the planned NUJ Press Week, which the governor had earlier approved, noting that an initial letter sent to the office of the Chief of Staff was allegedly missing.
“On arrival at the gate, I told the SSS officer identified as Manasseh that I was here on appointment with Chief of Staff to the Governor. Manasseh told me that I couldn’t see him. According to him, ‘You were here yesterday for the same purpose, why did you come back again today?’ “I then called the Chief of Staff who told me that he was not in the office but that he would send someone to meet me at the gate and collect the letter. Meanwhile, I had earlier instructed my driver to go and park the NUJ bus at the Press Centre. As I made to go to the Press Centre to wait, Manasseh ordered the police officer to beat me up right from the entrance of Government House to the Press Centre in the presence of members of staff of Special Duties Office who watched in disbelief at the barbaric treatment meted out to me”, Atsaka narrated.
It would be noted that it is not uncommon with security men at the Government House being hostile to journalists even when they are officially called to cover events.
About three weeks ago, a police officer brandished his gun at The Sun correspondent in the state, Mrs. Rose Ejembi, while she was attempting to go inside the State House to cover an event. Also about three days ago, members of the Correspondents’ Chapel who were on the governor’s visit to some projects sites, were nearly stopped by the security team on the tour from gaining entrance to one of the venues.
Several of such instances abound in spite of complaints by journalists to the governor on the frequent molestation of newsmen by his security team.
When The Guardian called the state Commissioner of Police, Adams Audu, on the matter, he expressed shock and said he would investigate the matter. The Command’s PPRO, Daniel Ezeala, appealed for calm, saying he would also investigate the matter.
Source
Previous Post