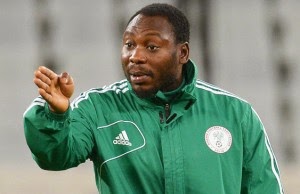 Taraba United have denied reports they are interested in hiring erstwhile Super Eagles assistant coach, Daniel Amokachi, as their new head coach, completesportsnigeria.com can report.
The former Nasarawa United and Enyimba coach was spotted at the Jolly Nyame Stadium during last weekend’s 3-3 Nigeria Premier League draw between Taraba United and Gabros United, prompting speculations that he was in line to be recruited by the club.

But Chairman of the club, Tijani Babangida, has poured cold water on the rumours, stating that his former Super Eagles teammate is not on the club’s radar.

”It’s not true that we want to bring in Daniel Amokachi as our new coach,” Babangida said on Friday.
”He was just in Jalingo to watch our home game against Gabros and there is nothing more to it.
”At the moment we are happy with what our coaches are doing and will do whatever we can to ensure the team continues to do well.”

Taraba United, who are without a win in their last six games, travel to Jos as guests of Giwa FC this weekend.

From Our inbox: ‘Is it true Benue men offer their wives as cola to visitors?’

From Our inbox: ‘Is it true Benue men offer their wives as cola to visitors?’