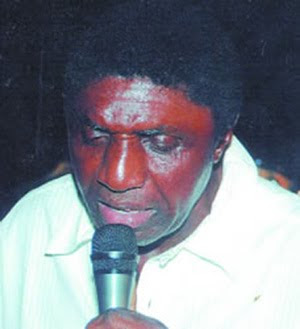 Since stepping into music industry with his debut Otachipopo in the early 70s, founder of Groovies Music Bongos Ikwue is not ready to leave the entertainment world even at 69. When Daily Sun visited Bongos Ikwue’s Avenue home in Otukpo Benue State, the 69-year old Idoma baladist who believes in universal peace and love still wore his sports bushy Afro hairstyle that use to give him a youthful look.

He’s simply dressed in his trademark-faded khakis, a pair of sneakers and his usual casual top. The CEO of the Double K Resort who suddenly went out of •Bongos Ikwue
circulation almost shunned the life completely before relocating to his country home; spoke exclusively to Voice of the Nation on the reasons behind his long break from the music platform, the projects he’s embarking on, his intimate relationship with Victor Uwaifo, the way forward in Idomaland and other national issues.

Long break from music
Thanks for coming; I have been cooking up some beats in the studio; I’ve been doing a lot of my musical hits with my musicians all the while, I’ve been doing several remixes here and there and by the time I am through with everything; Nigerians and even the whole world will really realize why I’ve been off the stage all this while.
Though, I’ve over-heard many peoples saying that Bongos has faded, Bongos is too busy to bothered by rumours, all I know is that a dog that bites doesn’t bark. By the time I am through with my projects the whole world would be a living witness to the fact that Bongos Ikwue has not faded because I have always been a pacesetter. I want to boldly tell the people that my best is yet to come, the world is about to see the other side of me.

Why I relocated to Otukpo
There’s no place like home, charity they say begins at home, I must give back to my roots. This is the land of my birth I can’t develop other man’s land while mine is begging for attention, I want other musicians to come and even do their recording here after the completing the multi-million naira studio I am putting in place

My studio
All I believe is that whatever is worth doing at all is worth doing very well.
I don’t believe in redundancy, shortcut or patchiness. I won’t talk much about the studio until it has seen the full-light of day because you cannot go to war until you have a better weapon ahead of your enemies. I am happy that the over N50m studio I am building is debt free and we are as well equipped with relevant basic training and specialization.

Music then and now
Nowadays you could hardly see a local music that would make waves for three years, my Ella and Still Searching is one of the greatest hits of the past and it is still enjoying airplay on many radio stations across the globe. You could hardly hear a soul-lifting song from the present artistes; they are fond of singing about sex and unethical issues, there’s now paucity of live bands. We must not all be gospel artistes and we must not all be reggae artistes, what about the ballad grassroots music? Here we play some of our old hits, and I’ve refined Ella in a more creative style. We are bringing new ideas into some of the old songs by modernizing the hits by passing them through today’s modern technology. I believe I have a better set of musicians now than ever before. Each of them plays instruments and beat drums very well. I must confess that all my musicians are all good at what they do.

Why artistes face dwindling fortunes
An artiste is bound to fail when he cannot give a good account of his music. He or she can hardly last long in a world whereby a producer would always try the system and borrow beats just to add colour to the rhythms. There seems to be no live bands again as all artistes want to sing one genre of music. The tendency for you to succeed is narrow if the entire message in your album is all about sex and flex.

Piracy
It is painful to produce a methodical musical work and some people would just lay their hands on it. Piracy is a cankerworm that has been eating deep into the entertainment industry. This is why I am working painstakingly to safeguard my present musical efforts that cost me sleepless nights, fortunes and a lot of energy to realize.

My family
I thank God for my lovely wife, very caring and nice. God blessed me with good children who are all graduates. They were educated in the United States and two of my daughters are good singers. One of them has written and recorded an eight-track album, which would soon be released.

I’ve not faded
I am currently working on an album, which is one of the reasons behind my disappearance form the stage. I just want all Nigerians to keep their fingers crossed for my on-coming album; they will be amazed to listen to an album that would play for more than two hours non-stop both in audio and visual output that will bring about an enhancement of culture and good music in the nation.

I studied engineering
I am a qualified engineer from the Ahmadu Bello University Zaria. But I don’t believe in conventional education, I have always known that in most times academic is vilely overvalued. I design all most of the architectural works in my house. There is so much knowledge out there to acquire. For me I’ve have my own scheduled timetable, if am not into music today I would be designing; that is why it is important for one to be humble.

Victor Uwaifo and I
Uwaifo has been a friend, brother and adviser to me, we started everything together right from our youth. He is a kind of artiste who doesn’t believe in modern technology, Victor is a singer that can make music out of anything. I take pleasure in his some of his songs like, Joromi which he rendered in Benin language. I also like the late Aku who was also a good songwriter and singer until his death. The likes of Owaifo and Aku are ow hardy seen in our industry.

My kind of music
I believe we musician are endowed with different kinds of genres. As for me, I am versatile such that I can even bring Australian music to Otukpo here. Otukpo is a home of entertainment; we’ve produced top musicians and producers in the country. Though music is good, that does not mean we should all turn to musicians. It has its own kind of message to deliver

Idoma artistes
I must confess that God blessed Idoma with talented artistes, we’ve produced the likes of Tuface Idibia, Blackface, Ada Ameh, TerryG, Johnson Agada and other veteran artistes who are making waves with their own music to produce more artistes who would even make waves than the existing ones.

My performance @ Gov. Suswam’s bithday
During the birthday anniversary of my governor, Rt. Hon Gabriel Suswan people were astonished to see me performing with a lot of passion even at 69, the event was such a remarkable one.

Re-branding project
I must commend Dora Akunyuli for that campaign she’s anchoring, but we all should also contribute our own quota to reposition the state of the nation. Re-branding the country should not be thrown in one man’s lap. Let’s join her to put the nation in other; be it re-branding or whatever

Message
All musicians should note that, humility is not hostility, as a musician you are bound to be humble

A world for Nico Gravity

A world for Nico Gravity