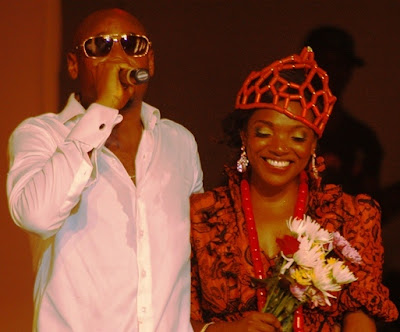 Popular singer, Innocent Ujah Idibia, ffamously known as Tuface, may walk down the aisle with Nollywood actress, Annie Macaulay anytime in February, 2013.
It was gathered that the lovebirds plan to seal their relationship with a lavish society wedding that may shock their fans and admirers before long.
The Idoma-born songster shocked critics, who never thought he would settle down, on February 14, 2012 when he chose Annie over the other women in his life and the mothers of his children, and asked her to be his wife.

Three months later, the couple got married secretly at the Lagos State Registry in Ikoyi.
As expected, the secret marriage, which was witnessed by a handful of relatives and friends of the couple had ignited mixed reactions from music and movie fans across the country.
The father of six has since defended his action, claiming that it was deliberate and intended to avoid undue interference.
Annie Macaulay’s manager, Naomi Adenuga, said that preparations for the wedding were already in progress.
Adenuga said, “The wedding would hold sometime this year. A date or location has not been fixed yet. The wedding would be as elaborate as it would be comfortable for the couple. So far, the public knows that they have done a court wedding; at the appropriate time, the public would be informed about the wedding. We would send invites to the necessary people and everybody would get to know eventually.”
But sources close to the couple told our correspondent that the wedding had actually been scheduled to take place in Lagos on February 14, 2013 ( St. Valentine’s Day).
Previous Post