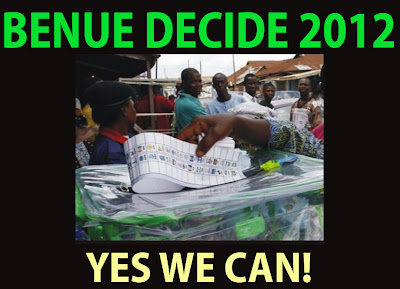 Two persons were yesterday allegedly killed in Gwer East Local Government Area of Benue State by suspected gunmen while a chieftain of the Peoples Democratic Party (PDP) in Ukum Local Government Area, Mr. Sylvester Atachin was kidnapped by some armed youths during the conduct of local government poll in the state.
There was also clash between members of the PDP and the Action Congress of Nigeria (ACN) in Gboko and Tarka local government areas, where scores of persons reportedly sustained various degrees of injuries.
However, it observed that accreditation of voters commenced at exactly 8am in Makurdi, the state capital and a few local governments close to the state capital. Voting process started at between 10am and 12am.
Though voting took place in council areas including Vandeikya, Otukpo, Kwande, Agatu and Konshisha among others, election could not hold in some polling units due to the late arrival of the election materials.
There was no vehicular movement in the 23 local councils of the state, which began at about 6am and lasted till 4pm. Commercial activities were hindered while markets were closed. Even religious places of worship were locked to enable electorate exercises their franchise.
Fracas reportedly broke out between supporters of the ACN and those of PDP in Gwer, where members of the rival political parties exchanged gun fire, resulting in the death of two persons.
It was gathered that in Ukum Local Government, a chieftain of the PDP, Mr. Atachin was abducted by some thugs when he was conveying electoral materials for Alabar polling unit to a place called Kyado.
The armed youths intercepted him including his official vehicle, locked him up in the boot of a Hiace bus and drove off with him to an unknown destination.
Previous Post

Married Idoma woman dares Alekwu, claims she is pregnant for her ‘secret lover’