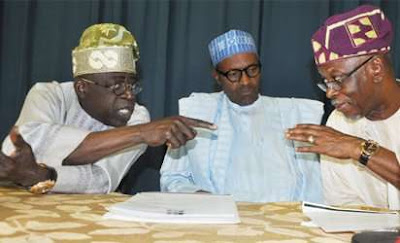 Politics is all about interest, it is a game that is very interesting to watch from outside. In politics, there is always a motive behind every action, and that motive is what I am concerned with today.
It is no longer news that there have been a call for the resignation of the national chairman of APC by its’ national leader… because of his dissatisfaction with the handling of Ondo state primaries.
APC is the merger of ACN, CPC, ANPP and N-PDP.

This is what is going on. The leader’s candidate just lost his case at the Supreme Court last week, in “his government”. It was a victory of CPC against ACN. There have been battles for 2019.
The judgment of last week, is a failure of ACN faction in APC to gain control of Kogi state, CPC triumphed over ACN again and definitely, the national leader won’t be happy.

Similarly, he may felt that the National chairman with the help of power that be, is trying to undermine his influence again in Ondo. A state is has been trying to conquer.
The national leader has a regulated control at the center, because appointments at the center didn’t come as expected.

The CPC cabals are checkmating ACN and N-PDP influence in APC.
Take a look at Benue, Akume lead Benue delegates to vote for Atiku and not PMB during APC presidential primaries. Atiku has a colouration of ACN and N-PDP.

When Daniel Onjeh nullified Senator Mark’s election, the CPC cabals who are in greater control of power, felt that removing Senator Mark, is like giving Benue totally to Atiku.
In their calculations, Mark has 65 PDP senators at his grip of influence, why sacrificing a man with that kind of asset for a young man who is not of much political asset.

The annulment of the elections by (Akume’s ACN) has demoralized and humbled Mark already. The CPC cabals moved in, they never wanted Benue to be in total control of Akume who is a pro Atiku and a Tinubu ally… they negotiated the game and Mark narrowly returned… if you can still remember, APC at the center had this look warm attitude during the Feb. 20 re-election.
The only minister from the state didn’t vote, he complained that he lost his card. The power that appointed him, didn’t want the result to go otherwise.

Don’t expect Senator Mark to go against the wishes of the CPC cabals. He is fully under check, If I were them, I would show him his files at Magu’ office and detect to him what to do with his PDP Senators to protect their interests at the red chamber.

Now you understand the body language of Senator Mark meeting and smiling with PMB few days to his judgement at the Court of Appeal, it was a was of the CPC cabals telling the world that WE ARE IN CHARGE.

Expect many fireworks till 2019, in politics it is all about interests… no action without motive!
I see factions breaking out, because the cracks are evidently visible. CPC cabals dread any ATIKUlated move towards Tinubu… Any strong ally by both, is very dangerous to the survival of CPC.