Why Agatu Peace Concert is taking place in Abuja – Organisers, One Idoma Initiative

Why Agatu Peace Concert is taking place in Abuja – Organisers, One Idoma Initiative 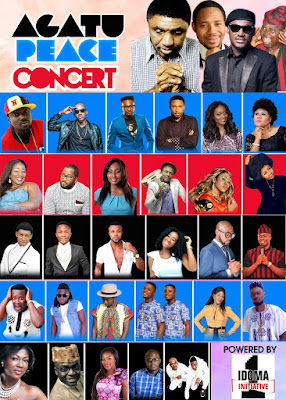 One Idoma Initiative, organisers of the Agatu Peace Concert have explained why the event is taking place in Abuja and not Benue State as widely expected.
The group was reacting to comments by some concerned Idoma citizens who have been criticizing them for staging an event tagged “Agatu Peace Concert” in ‘faraway Abuja’ instead of Agatu or Apa local government where victims of the Fulani attacks are.
Explaining the reason for the venue, the group’s Director of Media, Paul Moses said the major aim of the event is not to entertain people but to raise funds and create further awareness on how to rebuild Agatu again.
He cited security situation in the area as well as logistics as another major reason the event could not hold in Benue.
Paul recalls that when the world needed to hear their voice, the group led other well-meaning Idomas in protest to the National Assembly to inform our leaders on how Agatu people are being slaughtered like goats on quotidian.
He said, any money realized from the event would be used to rehabilitate the Internally Displaced Persons.
According to him, “this statement became imperative following the verbal attacks on us by some persons who feel we should have staged the event in Agatu.
“Inasmuch as the critics have their own point, we want to quickly explain the thematic focus of the event.
“First, Agatu is a ghost town right now. The logistics required to host a concert of this magnitude in Agatu will be more than enough to begin some preparatory arrangements for some of the victims’ relocation.
“We took more than 60 medical doctors to Agatu when we had the medical outreach. But here is the real deal.
“The protest that we organized that brought the massacre to limelight and attracted local and international media took place here in Abuja on the 2nd of March, 2016.
“It forced the Inspector General of Police, Solomon Arase to visit Benue the next day and also got the attention of the presidency.
“The people that will and can make a difference for Agatu live here and may not be willing to go to Agatu.
“The event is not just organised for fun. We want to raise funds to bring Agatu back to life,” Moses said.
The event, which is slated for Sunday, May 22, 2016 at the Sheraton Hotel, Abuja, will parade top entertainers like 2baba Idibia, Bongos Ikwue, Blackface, Desmond Elliot, Uti Nwachukwu, Chris Morgan, Enenche Enenche, Naomi D’Diva,  Peter Otulu and a host of others.
Other special guests include: the Honourable Minister of Agriculture and Rural Development, Chief Audu Ogbe, Distinguished Senator David Mark and Apostle of the Most High, Dr Pastor Paul Enenche, Senior Pastor, Dunamis International Gospel Center.
Previous Post