Why Wike hates me – Ortom

Why Wike hates me – Ortom 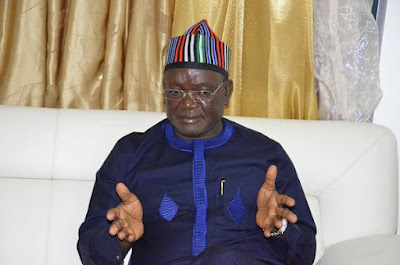 exchanged hot words concerning developmental projects, among others.In a chat with newsmen on his stewardship in the last two years

​, Ortom spoke on the disagreement between the duo.
​
His words: “

Me too I was confused because we were very friendly when we served as ministers of State under President Goodluck Jonathan.

But I think the problem was when my party sent me to Rivers for a re-run senatorial election and we went there and campaigned. He said why should I come to Rivers to campaign?

I said, well we are in different parties now and you can also invite your own party to Benue but I decided not to join issues with him.

I think he was deliberately trying to draw me into something but whatever it is; he can insult me but I’m a Christian and I’m told as a Christian not to pay back.

Whatever he has said against me, I have decided to keep quiet about that and I’m not offended

​sked to comment on his challenge in office a​

​Ortom said the i

I inherited it. It was there before I came in. While serving as a minister in 2013, my ancestral home was destroyed by these herdsmen and more than 52 of my kinsmen were killed in one day.

They were killed in Gbajimba which was under siege for some days; the militia group came and they dealt with us. In fact, the entire Guma local government was under siege. It was  amazing.

Our people did not participate in rustling their cattle but we were accused that the cattle were rustled within our area and so these militia men came and took on the helpless and armless people and killed them in that area.

So the point was that we were able to control the criminality that was going on among the youths through the amnesty programme, but the herdsmen were a big challenge.

hough I appreciate the fact that, some of them had issues with criminal elements in our society coming to rustle or steal their cattle and kill the herdsmen.

But each time they came, the militia didn’t go for the real target, they go for innocent people. So, it was a big problem controlling these criminals and then the herdsmen.

On the other hand, the herdsmen come with their cattle and encroach into people’s farmland and crops and when they complained it resulted into fighting and it became a very big problem.

So, we decided that the only way out is for the herdsmen to continue to breed their cattle but they will have to learn the modern way of breeding cattle, which is ranching and this is what is being practiced globally.

And that was what motivated us to send an executive bill to the Benue State House of Assembly to make a law to ban open grazing and successfully, the bill was passed about two weeks ago and I signed it into law on Monday, May 22.

We believe that that will put to rest all these issues. The Fulani men are free and any other person is also free to secure land in Benue State and ranch their cattle for peace to reign