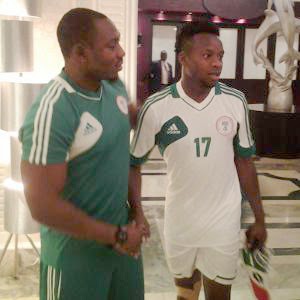 All is now set for the 20thedition of world’s most watched competition –the FIFA World Cup, holding in the Samba City of Brazil.
The world’s biggest single sporting extravaganza will officially kick-off from today, June 12, when the host nation, Brazil will lock horns with the Blazers of Croatia in the opening match of the tournament.
Interestingly, in the next one month, the world would be speaking one language – futebol no seu melhor.
Of course, soccer fans across the globe will be looking foward to Lionel Messi, Cristiano Ronaldo, Ozil, Neymar et al to show what exceptionally gifted entertainers they are on the field of play. In fact, it is batalha do talentoso.
African Champions, the Super Eagles of Nigeria are already in the soccer city of Brazil to take part in the competition for the 5th time.
It would be recalled that the Eagles had only made it to the round of 16 twice in their last 4 appearances at the mundial.
After conquering a hard-fighting African continent at the last nation’s cup in South Africa last year, the Eagles are set to shock the world.
The question is: will Nigeria be the first African country to win the World Cup? That answer is in the womb of the next 43829 minutes.
Your soar-away Idoma Voice takes a look at two Idoma sons who would lead the Kings of Africa to glory in Brazil. 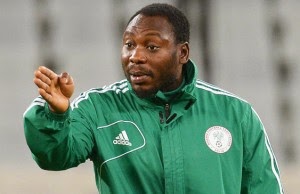 Amokachi, nicknamed “The Bull” was discovered while playing for Ranchers Bee by Nigerian national team coach Clemens Westerhof, who brought the talented player to the 1990 African Nations Cup, and soon Amokachi moved to play for Club Brugge in Belgium. He competed in the new format of the Champions League, and became the first player to score in the competition, after his goal secured a 1–0 win in the opening match in the group stage against CSKA Moscow. Performing well in Belgium and at the 1994 World Cup, Everton became interested in Amokachi and their manager Mike Walker signed him for a fee of £3,000,000 ($4,700,000).

He went on to win the FA Cup with Everton in 1995, famously infuriating manager Joe Royle by bringing himself on as a substitute then proceeding to score two goals in the semi-final against Tottenham Hotspur. He appeared in the final only briefly, late on, as a substitute but is remembered fondly for his beret wearing celebrations.
Amokachi was born 30 December 1972 in Kaduna is a Nigerian former professional footballer of Idoma descent and assistant manager of the Nigeria national football team.
As a player he was a striker from 1989 until 2005, starting his career with Ranchers Bees before earning notability by playing outside his native country with Premier League side Everton, as well as Club Brugge and Beşiktaş before initially finishing his career in the United States with Major League Soccer club Colorado Rapids. He returned to Nigeria in 2005 to briefly play for Nasarawa United, who he went on to manage before moving on to Enyimba.
In April 2007 he quit his role as assistant coach of the Nigeria national team. On 10 April 2008 Amokachi was re-appointed to Nigeria’s national team, the Super Eagles, as assistant coach to Shuaibu Amodu, also being assistant manager to Stephen Keshi.
No doubt, experienced Amokachi has been of great help in rebuilding the national team following their fallout in South Africa four years back.
How far can the country go in this tournament, Amokachi avows: “Nigeria are one of the underdogs but probably we’ll be one of the dark horses along with the likes of Colombia and Belgium. “Coach Stephen Keshi has the same ambition as myself and we think alike – you don’t set a target saying I want to get to the second round or the quarter-final or the semi-final, we go there to work hard and in football anything can happen. “We could meet a team like Brazil and they have a bad day and you end up beating them. “We’re going to take it a game at a time but we’ll look forward to spending the whole month in Brazil,” the Ogbadibo-born ex international asserted. 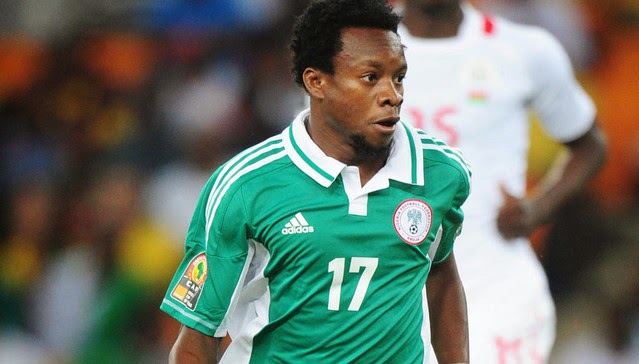 Call him the new Sunday Oliseh of Super Eagles and you wont be wrong. Ogenyi Onazi is one of the players who inspired Nigeria’s victory at the 2013 African Cup of Nations in South Africa.
Born 25 December 1992, Ogenyi plays as a central midfielder for Serie A club Lazio and the Nigeria national football team.
Onazi began to play football in the youth system of El Kanemi Warriors and went on with My People FC. The latter side was founded by a Nigerian Pastor and aimed at promoting talented players. Thus, in 2011 Onazi was noticed by Lazio scouts. In 2012, he joined the first team of the Italian club. He has also made several appearances for Lazio in the 2012/13 UEFA Europa League.
“Yes, they say we have not been scoring many goals but these are preparatory games, when we come to the tournament proper they will see the real Nigerian national team,” the Idoma-born footballer had said ahead of the World Cup.
From all of us here, it is África bem-vindo.

Send us press release/articles and stories on idomavoice@gmail.com

Rough tackle: Justie must be done -Onazi cries out

Rough tackle: Justie must be done -Onazi cries out