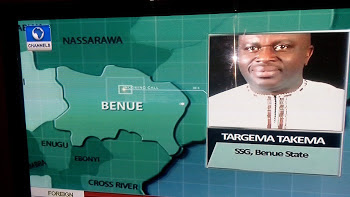 The Benue State government says it is making effort to generate funds that could clear backlog of unpaid salaries to workers and pensioners in the state.
Workers in the State have been owed about five months Salaries while pensioners have not been paid since November 2014.
In a telephone interview on Monday, the Secretary to the State Government (SSG), Targema Takema, told Channels Television that the government owed about 12 billion Naira to the workers and pensioners.
Mr Takema said that the Governor had held discussions with his economic team to find a way of paying the workers.

“They have been doing some kind of negotiations with the bank. They are also discussing with President Muhammadu Buhari to see how the Federal Government could assist.

“There are plans to see how March salary could be paid,” he said.
Mr Takema said the State government would implement reforms that would help ensure improvement in its Internally Generated Revenue.

He also gave indications that the government could slash number of workers.
“The governor has put in place a group of experts and we are looking at implementing reforms along the lines of internally generated revenue. We have about 20,000 workers and we know that what the state may need will not be up to that number.

“We have a ridiculous position of about 250 million Naira a month. We are looking at raising up to one billion or 1.2 billion Naira in a month from the IGR. There is a lot of gaps in the collection and remittance of the IGR,” the State government official said.

The SSG stressed that the State government spends about 360 million Naira per month, as overhead cost, explaining that persons in charge of planning were not too careful.

He said corruption had also contributed to the rise in the amount of monies owed.
Primary school teachers in the state are also owed over nine months’ salary, but Mr Takema said the government was taking a holistic approach to ensure that the payment of the Salary arrears.