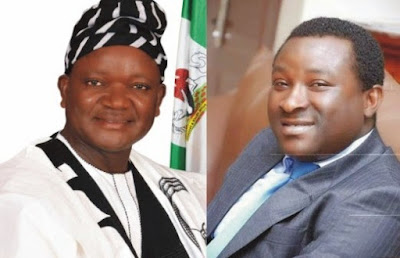 The governorship candidate of the Peoples Democratic Party, PDP, in the last year’s election in Benue State, Terhemen Tarzoor has reacted to the court judgment, which threw out his case against the governor, Samuel Ortom.

Tarzoor had approached the Supreme Court, praying it to sack Ortom as the state’s governor on the ground that he was never qualified to contest the guber election.

However, Justice Sylvester Nguta in his verdict on Fridy threw out the appeal, saying Tarzoor had no locus standi to file the case since he was not a member of the APC.

Shortly after the judgment, Tarzoor in a statement thanked his supporters for believing in his dream.
He also thanked the PDP for giving him the opportunity to fly its flag during the election.
His statement below:

“It is with a deep sense of responsibility that I wish to extend my profound appreciation and gratitude to my teaming supporters comprising elders, stakeholders, youth and women groups as well as non-partisan technocrats who have stood by me in my quest to govern Benue State, a journey which began with formal consultations since 2012.

Because this contest was partisan, the then ruling party, the People’s Democratic Party (PDP) provided me the opportunity to contest for the governorship primaries which on Monday, the 8th day of December, 2014 climaxed with my emergence as its candidate for that office, on its platform.

The rigorous campaign exercise took me to the nooks and crannies of our dear state, where I had the need to come face to face with development challenges confronting our state. Consequently, I had prepared a sound document which highlighted my developmental programmes, ultimately targeted at ameliorating the sufferings of the people, particularly those living in the h interlands of our state and are nearly cut off from the urban centres.

On Saturday, 11th April 2015, the general election was conducted by the Independent National Electoral Commission (INEC) with the results indicating that the opposition All Progressives Congress, (APC) as it then was, had emerged victorious at the polls.

Quite dissatisfied with the emergence of the candidate of the APC, less than two days after he had lost to me in the PDP primaries, I approached the Benue State Governorship Election Petition Tribunal for legal interpretation as to who is constitutionally qualified by law to be a candidate of a political party in an election in the country.

It is no longer news that both the Tribunal and the Court of Appeal sitting in Makurdi all confirmed that I had right to question the emergence of my opponent in the said election but variously dismissed my petition.

Today, the Supreme Court, the Apex Court on our land has held, rather strangely, that I lack the locus standi to question the emergence of my opponent. And because it is the Apex Court, my legal journey terminates here, setting legal precedence on cross carpeting and its reward.

As I have always held, the decision to toe the path of justice after the conduct of the election by INEC, was not directly or indirectly, targetted at any individual or group. It was rather aimed at contributing my quota to the strengthening of our democratic institutions, practices and values and to equally see if the excesses of overzealous political leaders could be checked. This is, however, not to be.

Let me appreciate my legal team led by Afe Babalola’s Emmanuel Chambers. These brilliant lawyers displayed a deep understanding of the Nigerian law. In addition, their comportment throughout the duration of the tribunal, Appeal and up to the Apex Court has demonstrated deep ethical consciousness and professional excellence.

Lastly, let me once again salute my elders, party men and women as well as members of other political parties, the press and social media groups who have stood by me in this struggle. I salute you all.

Finally, let me use this medium to congratulate my esteemed elder brother and Executive Governor of Benue State, His Excellency, Chief Samuel Ortom on his victory at the various stages of litigation. May the Almighty God grant you the wisdom of Solomon to lead Benue to the height it deserves.
Thank you and may God bless us all.”