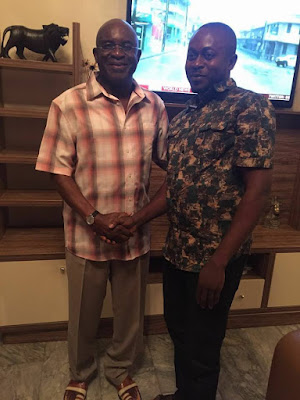 There is currently palpable tension and fear in the camp of the All Progressives Congress, PDP, in Benue State following the decision of the Peoples Democratic Party, PDP, to name controversial journalist and citizen reporter, Sunday Oseyemi Itodo, otherwise known as Prince Yemi Itodo its Head of Media and Publicity ahead of the Local Council polls in the state.
Electorates across the 23 LGAs in Benue State are expected to hit the polling booths to elect their respective Local Government chairman come June 11.
IDOMA VOICE exclusively gathered that rising from a stakeholders’ meeting held in Otukpa, the powerhouse of Ogbadibo on Monday, Mr. Itodo has been anointed to lead the media front in the quest to redeem Ogbadibo from intruders and godfathers.
According to an insider, Mr. Itodo was favoured ahead of other persons earlier suggested because of his vast experience in public relation as well as his social media strength and influence.
The insider recalled how Mr. Itodo, otherwise known as Power Shift in the political terrain played a vital role through the social media during the February 20 senatorial rerun in Benue South, which returned former Senate President David Mark.
“Power Shift (Yemi) is the right man for the job. In fact, he is a rounded peg in a rounded hole. The party won’t forget his sacrifice during the Benue South rerun when some persons from a strange land wanted to come and take over our political platform. He (Yemi) led the war front using his social media strength and we won the election.
“This time around, he will still be leading the media team to rescue Ogbadibo from some intruders and godfathers who want to impose an unknown figure with questionable character on us,” the source said.
However, the development has sent the APC into disarray.
An insider hinted this reporter that the party is currently shopping for who will match Itodo’s media prowess.
The source said the APC has not forgotten in a hurry how Itodo dealt with them during the rerun.
When contacted, however, Mr. Itodo promised to get back to this reporter.
“This evening, I shall address you on the way forward for Ogbadibo in the forthcoming LG poll!,” he said via a text message.
An ardent supporter and stakeholder in the PDP, Mr. Itodo has been active in Ogbadibo politics for over 15 years and currently serving as Media Consultant at the National Assembly, Abuja.

Why BSU is on strike – Ortom’s aide

Why BSU is on strike – Ortom’s aide