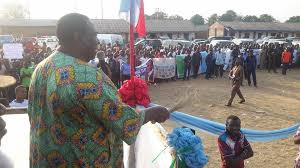 Chief Obande Obeya, Oyame K’ Idoma and APC big wig in Benue South senatorial district has denied kicking against the candidacy of his party, Daniel Onjeh in the forthcoming rerun in the zone.

The respected elder statesman was quoted in a statement believed to have been championed by the opposition party that Comrade Onjeh does no have what it takes to lead the Benue South.

He wondered why anyone could come up with such crude story to smear his name.
“I cannot be involved in this huge joke called Onjeh’s senatorial bid. So, Idoma has become so cheap a political article that a pampered toddler would be considered a senator. Could this mean that I would have to report in Onjeh’s house, assuming he has one, as my Senator?

“What is his pedigree and contribution to Idoma’s development? This is not the best joke for the times of change,” Mr Obeya was quoted as saying in the report.

However, commenting on the report, daughter of Chief Obeya, Evelyn, wrote: “Please, where did you get this info from?.I just spoke with my Dad and he’s surprised that someone can come up with an article like this.Please show some respect and delete this lie, thanks”

SEE VIDEO OF HIM INTRODUCING ONJEH TO OCH’IDOMA