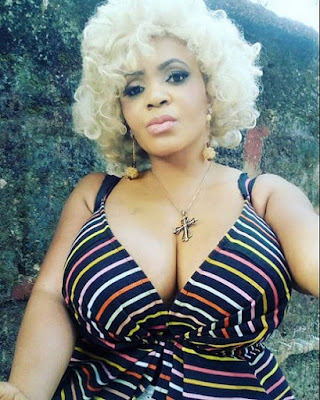 She posted on her Instagram page, @cossyorjiakor, a picture of the cats facing each other as if in a deep conversation.

“My cats, Buhari and Goodluck, (are) discussing the Nigerian economy (and) dollar rate,” the actress wrote.
Last month, a man, Joachim Iroko, who named his dog Buhari, was arrested and remanded in prison, following his arraignment at Ota magistrate Court 2, Ogun State.

The Nigeria Police had stated that Iroko’s “conduct was likely to cause breach of peace, by writing a name, Buhari, on a dog and parading same in the Hausa section of Ketere Market, Sango, thereby, committing an offence contrary to and punishable under Section 249 (d) of the Criminal Law of Ogun State, Nigeria, 2016.”The accused is expected back in court on Monday.

Orjiakor, however, expressed her readiness to be arrested for a similar conduct.

“All I want is a good-looking sexy police officer with Donald Duke’s (former governor of Cross River) face; Uti Nwachukwu’s eyes; PSquare’s chest and D’Banj’s ‘no long thing.’ He should come with sexy handcuffs.

“And he (the policeman) should have an English accent like Jim Iyke. All I want is a super-handsome police officer with six-packs and stamina to arrest me this morning (Saturday) and take me to Aso Rock prison; and serve me Aso Rock food because ‘Mummy Victor Market’ is too expensive these days.

“If it is a policewoman, then she must have fat, soft buttocks and big tits. I must be high on some cheap stuff this morning,” she said.
For Advert: Call 08171607004, 09058228464 Follow us on Twitter @idomavoice, @idomanews Send us releases at idomavoice@gmail.com