DSS arrest: ‘It is shameful’ – Dickson Akoh opens up

DSS arrest: ‘It is shameful’ – Dickson Akoh opens up 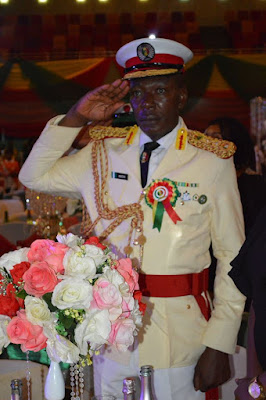 The National commandant of the Peace Corps of Nigeria, Ambassador Dickson Akoh has finally spoken on his encounter with officials of the DSS, police and Army on Tuesday.

Akoh was arrested alongside 47 others shortly after the launching of the corps’ new national office complex.
The security agencies accused him of breaching peace and extorting money from jobless Nigerians.
Speaking while he was being paraded on Wednesday, Akoh explained that the money collected was for the kits for members of the Corp.
According to him: “It is shameful that we have teething security challenges and you are showing our uniform as an exhibit. The constitution of the Corp approved by CAC properly vetted by the security before we were registered in 1998.
“There is national youth development policy that spells out youth organisation to operate and we have over 47 uniform youth organisation.
“We have been operating within our scope and we are out to reorientate the youth. No matter the character of youths, when they are taught national ethics and discipline, they change. The youths need a platform to change and that is what we do.
“The money paid is for their uniform, kits, accommodation because we pay for the venue. It is voluntary and not compulsory. We have ICPC’s clearance for that money. EFCC is investigating this matter and they discovered that we never forced anybody,” he said.

Why we arrested Dickson Akoh, other Peace Corps members – Police