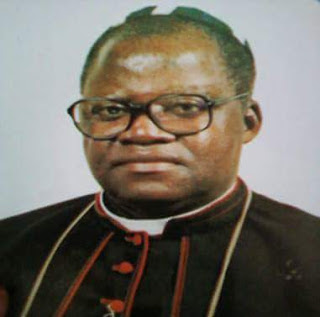 The Peoples Democratic Party aspirant in the forthcoming LG chairmanship election in Ado, Comrade James Oche has expressed shocks and sadness over the death of Catholic Bishop, Athanasius Usuh of Makurdi Diocese.

The death of the Bishop emeritus came barely three weeks after the Vicar General of the Catholic Diocese Of Otukpo, Reverend Father (Dr.) John Adeyi also went the way of mortal, thus making the season a very trying and difficult time for the Catholic family in Benue State, nay Nigeria as a whole.
Oche in a statement issued by his campaign Media Officer, Udeh Adole Media and obtained by IDOMA VOICE wants the deceased immortalized.

While commiserating with the bereaved family, the young and promising politician prayed God to give them the fortitude to bear the irreparable loss.

According to the statement, “We pray that God through His mercies will console the Catholic Bishops of Makurdi and Otukpo.


For twenty five years Bishop Usuh presided over the Catholic Diocese of Makurdi, there was unprecedented church growth culminating in the establishment of the Otukpo, Lafia, Gboko and Katsina-Ala Dioceses with the ordination of Bishops Fidelis Organ(late), Matthew Audu, Michael Apochi, William Avenya, and Peter Adoboh.

“At a time like this, the church need to pray more and live the life worthy of God’s eternal glory.

“We use this medium to call for the immortalization of both Bishops Athanasius Usuh and Fidelis Orgah for their immense contributions to the church and humanity.

“Finally, we sympathize with all Catholic faithfuls in Ado.