He charged the commissions to promote the highest standards in the administration of justice in the state and ascertain the actual staff strength in the local government areas. 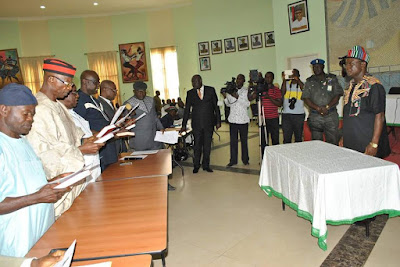 The Local Government Service Commission has Professor John Ortyoyande as Chairman with Terhemba Kondoun, Wilfred Duenya, Nathaniel Ijachi, and Ahen Akaakuma as members.
Performing the inauguration at the New Banquet Hall of the Benue Peoples House in Makurdi, Governor Ortom urged members of the Local Government Service Commission particularly to ascertain the actual staff strength in each local government area.

The Governor also enjoined them to work with the Bureau for Local Government and Chieftaincy Affairs to eliminate ghost workers and ensure sanity at that level.
He charged members of the Judicial Service Commission to strive to add value to the administration of justice in the state.
He congratulated both members of the Commissions and expressed the hope that as people of proven integrity, they would deploy their wealth of experience to impact on their assignment for development of the State.

In separate responses, Professor Ortyoyande who spoke for members of the Local Government Service Commission and Chief John Ochoga for the State Judicial Service Commission both thanked the Governor for the confidence reposed in them and pledged to work hard to actualize the administration’s vision.