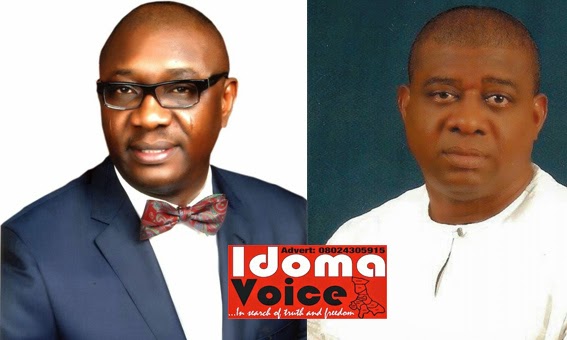 Out going lawmaker representing the Ado/Opoku/Ogbadibo Federal Constituency in the House, Hassan Saleh is currently at the receiving end of harsh criticisms from angry kinsmen over his call for the disqualification of the incoming lawmaker, Hon. Chris Adabah Abah, otherwise known as Mad Lion over issue bothering on certificate.
INEC has already said Abah would be declared elected by the INEC as there were no opposing candidates against him in the forthcoming poll.
Apparently irked by the victory as well as the overwhelming support Abah is rececing from his constituents, Saleh is currently trying to bulldoze his way back to the Green Chamber of the National Assembly.
Saleh is praying a Federal High Court in Abuja asking the court to disqualify Hon. Abah whom have been chosen to replace him having failing to deliver after four years.
The plaintiff is doubting that Abah did not attend Federal Polytechnic, Mubi from 1982-1983 where he obtained a National Diploma in Accountancy.
Saleh stated in his affidavit,  “Mr. Abah Christain Adabah, had never enrolled for a National Diploma programme in Accountancy at the  Federal Polytechnic, Mubi.
“Consequently, he was never issued with a National Diploma certificate in Accountancy.

“Thus, the National Diploma certificate (in Accountancy) he claimed to have acquired from the Federal Polytechnic, Mubi, is a purely forged one, and therefore not genuine. We therefore, distantly disassociated ourselves from it.

When the issue was brought before a hallowed group representing the interest of the zone, citizens of the area lambasted Saleh whom they said did not achieve anything meaning within the last four years.
An indigene who gave his name as Samuel Agbo advised the lawmaker not to waste his remaining money on the case as it is already ‘dead on arrival.’
Some even advised him to seek fortune in farming or any profession that would bring food to his table aside politics.
”I pity this guy. Must he continue? The people said they don’t want you and you want to force your way in, oga you better save your money because this your case na dead on arrival.
Another constituent who would rather plead anonymous told IDOMA VOICE that with or without certificate, Hon. Abah  remains their choice candidate.
”But wait, why is this Saleh guy so desperate? I though this certificate issue has been laid to rest. As someone would say, even if na NEPA bill, we would support him. A failure is a failure forever. Does he think our people are still blind? He should think of something better to do with his life rather wasting his money on a dead issue. Maybe he should trying farming. Mad Lion is the answer.”
Meanwhile, Jusstice Gabriel Kolawole had adjourned the suit till February 5 for mention.
Previous Post

Jonathan’s new name is ‘I will do’- Ameachi mocks Mr. President

Jonathan's new name is 'I will do'- Ameachi mocks Mr. President