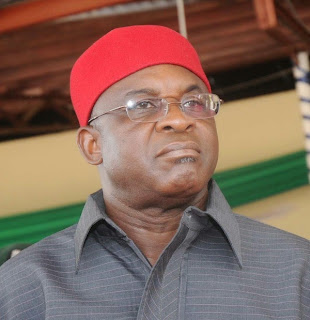 The leader of the Senator Mark has proven to be sturdy and steadfast in his desire for absolute unity and has shown his stance as a true federalist in his steering of the National Assembly and his indiscriminate treatment of members of the house.
It is no longer news that Senator David Alechenu Mark ranks amongst the most influential senators in the 7th Assembly and the yet to be inaugurated 8th Assembly. He holds the record of the longest reigning senate president ever in the National Assembly’s history.  These credentials surely, put him above all his colleagues and also make him a determinant force in who succeeds him and the happenings in the senate.

It is however unfortunate that Mark is gradually waning support at the home front with the tag of an ethnic bigot and the stain of tribalism.

Mark in his greatness and popularity outside his home state, Benue, has been constantly accused of pursuing not only a selfish agenda but also a promoter of ethnic and clannish politics which has put not just him but his people, the Idoma race against their brothers and neighbors, the Tiv who have seen him as the epitome of ethnic tribalism in the state.
Tiv Youth Assembly Voice has noted that already, the chasm which existed between the two major ethnic groups of Tiv and Idoma is already closing with the recent wind of change which has swept across the state and the nation, where the Idoma and Tiv all supported one party and proved that they can be united.
However news has rent the airwaves that the forth term senator has thrown his weight behind a North Eastern Senator as against his fellow North Central Senators amongst whom is Sen. George Akume a fellow senator from Benue state and Tiv man, a race for which he is claimed to harbor hatred.
We thus  believe that this new found romance could be the key to the long sought trust and love amongst these two neighbours. This is why it is pertinent for Sen. David Mark as the acclaimed leader of Benue South Senatorial District, to come out to clear the impression that he is the cog in the progress of this unity.
Premised on the above, Tiv Youth Assembly Voice is of the desire that a nationalist like Sen. David Mark ought not to sit quiet or on the fence in a crucial time as this. As Benue sets to present another ranking senator to replace him it is only right for Mark who has plied this route before leads the call for a preservation of the position by his home state without minding tribe or party affiliation. Regional interest should reign supreme; Benue state should sway all other interests for the interest of all tribes within the state.
This call is not just based on the ethnic and sectional reasons advanced above but based on the towering credentials of the character in question, which qualify him enough to take over from Mark.
Akume has proven enough grit to occupy the senate presidency having served as the leader of the Minority without rancor or unnecessary clash with Mark whom he has never failed to see as a brother even though from different political divides.
Sen. George Akume’s senate presidency bid should not be seen by Mark as an ethnic pursuit but another opportunity for the state to remain at the helms of affairs even after his exit and Mark’s contribution makes him a true detribalized Benue politician.
We do not expect Mark to support Akume just on ethnic grounds but it will be more wisdom for the resolute senator to throw his weight behind a character he will never regret as Akume has proven his mettle of performance from his sojourn in the Civil Service, through his eight year reign as state governor to his performance as Senate President.
We hereby plead with the distinguished Senator David Mark to clear the air on his alleged support for any other region other than his in consideration for the position of senate presidency and also join the state and its well wishers to ensure his region and state gets the Senate Presidency.
That, it is   expedient that Mark at a defining hour as this should make frantic efforts as one seen as a leader to further cement this budding relationship between the Tiv and Idoma, by supporting George Akume as his successor.
LONG LIVE FEDERAL REPUBLIC OF NIGERIA
LONG LIVE BENUE STATE
LONG LIVE TYAV

Lyrics of DAILY AS I LIVE by Chris Morgan (Plus Vidoe)