by Oladipo
in World News

Ukraine and Russia have never been on friendly terms, but their relation also has never been as hostile as now. It’s been over three months since Russia launched the biggest war in Europe since the WW2 against Ukraine under the guise of a special military operation. The siege has reduced many parts of the country into unrecognizable mounds of rubble.  Today we will be discussing Russian siege in Ukraine, and what can you do to help Ukraine.

Countless fatalities have ensued since the Russian declaration of War against Ukraine. From Large metropolitans to small towns and villages, many areas across the country lay in ruins, and their streets littered with rubble and blood. More than 13 million citizens have been displaced due to the worsening conflict, with thousands already dead.

Ukrainians need all the help they can get as they are on the verge of losing their homeland and identity – Not to mention the danger to their safety as the Russian military continues to demolish large swaths of Ukrainian land and wreak havoc across Ukraine.

One simple way to take a stand against Russia is keeping up with the news, raising awareness about the conflict. Russian government loves to spread propaganda and misinformation. They use it to amplify the already worsening conflict and block access to the truth. It’s better to use a private browser and install a secure VPN to use with it like the Firefox VPN plugin to stay up to date with the current factual and stop the propaganda. Furthermore, countries supporting Russia can also restrict information in their regions, making it even more important to stay updated and raising your voice against injustice. 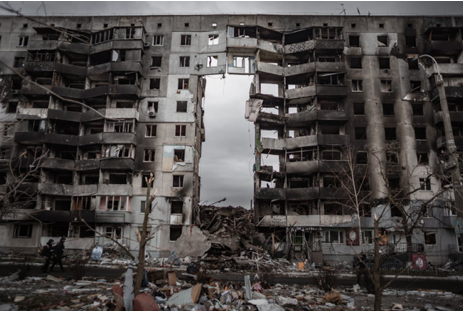 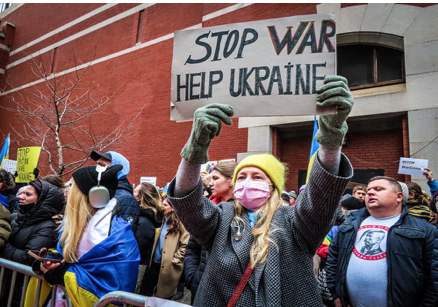 Under the oppressive force of the Russian army, many are forced to flee their homes for their safety with little to nothing to their name.

It’s high time we come together to protest Russia’s tyrannical lust for power that has led to the destruction of countless Ukrainian cities and the brutal massacre of innocent civilian lives. The world needs to come together and unite under the banner of humanity to help those suffering from war crimes, and those who have fled their homes for their safety.

How can you help?

There are many ways to support Ukraine, regardless of where you reside in the world. Below, we have outlined a few ways you can go about doing it.

The best way to help Ukraine is by reading and sharing only the true-to-facts news about the conflict from verified news sources. Some credible news sources on social media include accounts of held by Ukrainian government officials, including the President of Ukraine, the Ministry of FA Ukraine, and the Ukrainian Parliament. Apart from that, The Kyiv Independent, Ukrainska Pravda, and Euromaidan Press are verified news sources for accurate information.

Signing petitions and posting on social media are additional ways to show support for Ukraine.

Hegemonic maneuvers of this magnitude can leave anyone feeling powerless. After all, standing up to a global superpower like Russia needs guts. You can fuel the efforts in your community by joining a protest. It is one of the best ways to show solidarity with Ukraine. There are many resources online that teach you how to join and organize demonstrations in your area, regardless of where you live – from Sydney to New York.

You should also know the importance of boycotting Russian products; as every penny these companies earn is being fed to the military in their effort to overpower Ukraine.

People in Ukraine and those fleeing to safety abroad are in need of any and all medical and humanitarian assistance they can get. Local and international organizations throughout the world have established many initiatives to provide monetary help to Ukrainians to ensure their safety. You can choose to donate money directly to the Ukrainian rescue operation or to the refugees abroad.

Your donations can help Ukraine in many ways, and you can choose which initiative to support. For example, by donating to the military, you fund the Ukrainian military operations by supporting the Ukrainian army in their bid to win the war and stop this pointless conflict.

You can help Ukrainian refugees in ways other than donating. For instance, you can hire them to work for you as thousands of Ukrainians have lost their employment due to the ongoing conflict in their country. Relocation, visa sponsorship, and/or a remote work are all options you can choose to get them to work for you and support them in starting a new life.

Apart from that, you can also choose to be a host family for Ukrainian refugees. For example, if you own an Airbnb, you can rent it out to them.

We hope you found this article helpful. As discussed above there are many ways you can show solidarity with the people of Ukraine from donating to raising awareness and volunteering. No matter what how you help, your kindness can have a lasting impact on Ukrainian families.