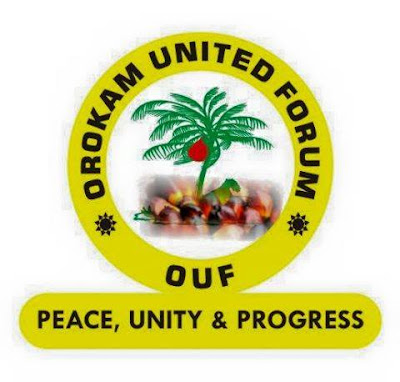 The Orokam United Forum has alleged marginalization of Orokam community in the forthcoming Ogbadibo Cultural Carnival.

The group in a statement by its General Secretary, Augustine Favour Itodo, alleged that the Orokam community has no representative in the organization of the carnival, adding that no native of the community was deemed qualified to be appointed into the planning committee, a development he described as sad and unfortunate.
The statement reads in full.
I have written in respect of this before, and I want to write again as the time is no longer on our side.
Ogbadibo Cultural Carnival is around the corner and we the good people of Orokam community are yet to have a representative among the Organizing committee.
I wrote to Ogboadibo Democratic Congress on this last month and one of the organizers, Johnson Agada, otherwise known as Mannex promised to get back to me on some of the contentious issues I had raised.
Some of the things I wrote on my post are yet to be addressed, which I know its due to his busy schedules as he moves up and down consulting with people towards the successful hosting of the event, but one out of the many inquiries that I had highlighted needed an urgent attention to enable we the Orokam Community know our stand and put our heads together.
I want to state it clear here on behalf of the good people of Orokam that we are yet to have a representative among the organizing committee of the planned event.
It however remain unclear to us if Orokam is not part of Ogbadibo or the Organizers are yet to get across to us.
I am pained that apart from the consultation visit to HRH the Ada’Ogbadibo by Mr Agada and his team sometimes back in July, and what we have been reading online we have not been officially communicated of the unfolding developments as regards the proposed Carnival since the idea was made known by the organizer.
Neither was there any attempt to incorporate any of our son or Daughter at this elementary stage to give us the hope that we are being recognized and nobody has updated us thus far on what is going to be our responsibilities at the Carnival so we could start early preparation, a development that has left us with a strong belief that either we are been sidelined or deformed.
As a peaceful people, Orokam community holds it with high esteem and a duty to be supportive of any event, activities or effort of any individual or group aimed at fostering Unity, love and progress of our dear local Government any time any day.
We therefore call on Mr Agada, who doubles as the president of the Cultural Carnival to ensure equal and a balanced members of the committee amongst the three communities to give them a sense of belonging.
For Advert: Call 08171607004, 09058228464 Follow us on Twitter @idomavoice, @idomanews Send us releases at idomavoice@gmail.com