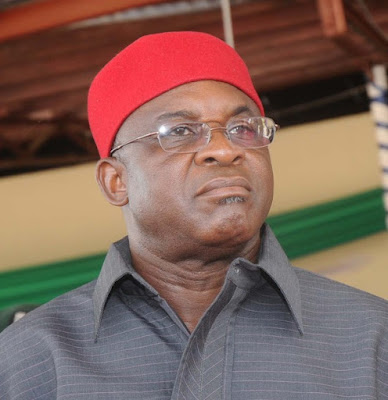 The Benue State Chairman of the Peoples Democratic Party, Dr. Emmanuel Agbo, has said nobody can stop the victory of former President of the Senate, Senator David Mark, in the Benue South Senatorial District rerun election scheduled to hold on February 20, 2016.

Agbo, who is also the Coordinator of the Conference of PDP Chairmen, said this in an interview.

He said his party remains dominant in Benue South Senatorial District, maintaining that there was no reason for them to fear, even though the All Progressives Congress is now the ruling party in the state and at the centre.
He said: “The senatorial district (Benue South) in question has nine Local Governments and 11 seats in the House of Assembly.
“Ten of them are in PDP.
“Agreed that after we gave victory to the 10 of them, one or two of them said they are defecting.
“Then of the four members of the House of Reps from the zone, all four are PDP.
“In my own Federal Constituency, no party fielded anybody against our candidate.

“Then we won the Senate and somebody came and said it is nullified.
“Everybody knows that judgement was clearly not correct.
“But of course we have taken it, we have accepted it because that is the last point we can go to seek redress.
“But I can assure you that as we go into that rerun clearly on the 20th of February, we will certainly win the election hands down.”

The PDP chieftain added that no amount of propaganda would work for any other candidate.
According to Agbo, the people of Benue South Senatorial District are solidly behind Mark for his laudable contributions to the advancement of the district since he joined the Senate in 1999.

It will be recalled that the Court of Appeal sitting in Makurdi, Benue State had on November 28, 2015 nullified the Benue South Senatorial District election where Mark was declared winner on the grounds of substantial breaches of the Electoral Act, consequent upon an appeal filed by Daniel Onjeh, the candidate of the APC.
Previous Post