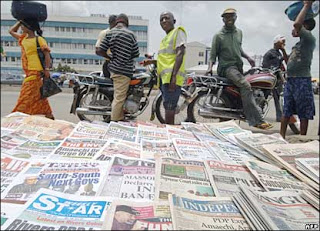 1. A former Commissioner of Police in Lagos State, Alhaji Abubakar Tsav has thrown a salvo on Benue State governor, Samuel Ortom, saying that he was being misled by what he tagged as a kangaroo committee.
Tsav said was dissatisfied with the new state government for terminating all last minute recruitments into the state civil service by former governor Gabriel Suswam as well as directing the immediate reinstatement of Ter Nagi, Chief Daniel Abomtse.

2. The deputy governor of Benue State, Engr. Benson Abounu has has bagged an International Ambassador for Peace award. The award was conferred on him by the Coalition of Civil Society Organization, Benue State chapter.

Speaking at the ceremony over the weekend coordinator of the group, Amb. Gundu G. Benjamin (JP) lauded the current government for what it described as a good start.

3. The Deputy Governor of Benue State, Engr. Benson Abounu has assured citizens of the state that the current administration will quash all form of marginalisation.

His assurance is coming at a time the Idoma natives of the state are complaining of being expunged from the scheme of the state.

Abounu said the current government under the leadership of Samuel Ortom will not welcome anything that would tear the sate apart.

4. It was indeed a black weekend in Benue State after one person was stoned and later burnt to death while several others sustained severe injuries during a cult clash between rival groups in the Welfare Quarters area of Makurdi, Benue State.
The rival cultists, numbering over 20 have reportedly clashed during a reprisal attack which they claimed was because some of their members were killed in a previous attack.

5. The National Agency for Food and Drug Administration and Control (NAFDAC) on Tuesday banned hawking of drugs in Benue. The state Coordinator of the agency, Ibrahim Anikoh, disclosed this in Makurdi when received members of the Benue state Correspondents Chapel of the Nigerian Union of Journalists (NUJ). Anikoh also said that the agency had banned the sale of unregistered local gin (Ogogoro) as a preventive mechanism aimed at preventing the reoccurrence of the Rivers and Ondo states disaster in other states.

6. Dr. Paul Enenche, the senior Pastor of Dunamis International Gospel Centre has prophesied that he saw develoment coming to Idomaland in no distant time,

The respected cleric was the guest minister at a just concluded crusade tagged The Move of the Spirit hosted by Methodist Church, located on Jos Street, Otukpo.
He lamented the backwardness of the community, saying that only God can bring change to the lad.

7.  The Benue House of Assembly has given the go ahead to governor Samuel Ortom to increase the debt profile of the state to N110bn.

The assembly on Thursday approved the request of the state executive arm to borrow the sum of N10 billion. The House gave the approval in Makurdi during a plenary session. Ortom had earlier declared that he inherited a debt of N90bn from his predecessor, Suswam.

8. Governor Samuel Ortom of Benue State, weekend, disclosed that his state is currently under a spell. The governor made this observation when he visited the defunct Taraku Oil Mills, Otukpo Burnt Bricks, and Ikwe Wildlife Park. Ortom said he was determined to life the evil spell cast on the state.

9. Gov. Samuel Ortom of Benue says it pays to serve and give generously to God’s work in order to reap His bountiful blessings.
He made this assertion on Saturday at St John’s Cathedral, Gboko, during a reception to mark the 60th birthday anniversary of Bishop William Avenya, the Bishop of Gboko Diocese.

10. The Nigeria Security and Civil Defence Corp (NSCDC) in Benue State at the weekend said it arrested 15 electricity cable vandals and two armed robbers from different parts of the state within the past six months.
State Commandant, Andrew Ugwumba, told newsmen in Makurdi, that the feat was achieved following surveillance by operatives.

You have a kangaroo committee – Tsav bombs Benue governor, Ortom