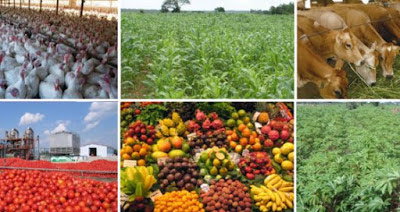 According to OluFamous  Presidency focusing on ICT/Tech as if we are going to compete with America, China or India. Get it straight, those countries got agriculture right and they were able to feed themselves before Tech became the next big thing for them.
Even if all our youths develop Apps and Programs, without affordable food nothing changes. I think the focus should be Agriculture and Agriculture, for government. Tech is global and we will find our way. After all, Mark Zuckerberg was brought to Nigeria by Tech guys, not government.

The acting Executive Director, Agricultural and Rural Training and Management Institute, Anthony Njoku, has expressed support for agricultural solutions to enable the nation recover from the ongoing economic recession.

He also stated that such initiatives were imperative in the transformation of the agricultural sector and successful diversification of Nigeria’s economy.

Speaking at the opening ceremony of a training workshop for farmers in the South-West, in Ilorin, Kwara State on Saturday, Njoku said, “Nigerian agricultural stakeholders desire a new order of doing things. We are convinced that emphasis should be concentrated directly on the farmers.

“If Nigerian farmers can be trained on how to manage and market their farm produce, then the situation that has kept us going round in circles would be dealt with. No longer should farmers labour incessantly on the farms without having anything tangible to show for it.”