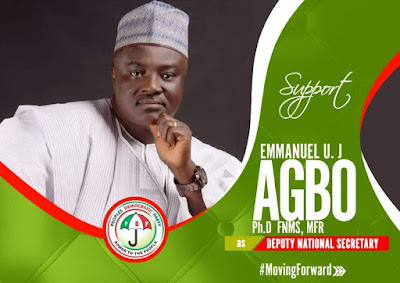 A former chairman of the Benue State chapter of the Peoples Democratic Party, PDP, Emmanuel Agbo has joined the race for the post of the assistant national secretary of the party.
Agbo, a Member of the Federal Republic (MFR) is known to be a pragmatic leader and outstanding while he was in office as the state’s chairman of the PDP.
He later became the  chairman of the conference of state chairmen of the PDP. He gave unbridled leadership to the party when the task was most arduous for reclaiming the most prized senatorial seat in Nigeria nay Benue. He delivered without blemish.
In fact, many consider him for post of the Asst. National Secretary position of the party because of virile national position to maintain the homeland streak.
James Oche, a former chairmanship candidate in Ado said “in terms of political visibility,  oratorical delivery, leadership comportment, local and national reach, candour,  beyond the the mere astuteness and integrity, no candidate for the position equals Rt. Hon. Agbo Emmanuel’s credentials.
“While educational qualifications may not make up all that is required in leadership, this gentleman, for God’s sake holds a Ph.D in Engineering. He is our pride. We do not want ego trippers to use communal and local differences to impinge our national plunge.
“We will walk with Dr. Emmanuel. He has no near equal in this race. We kindly implore all delegates to vote for this candidate for the greatness of our party and people.”