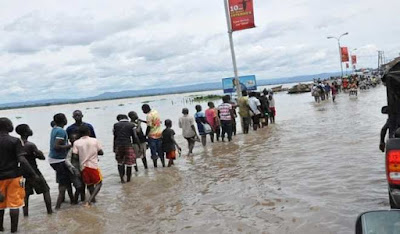 Victims of flood disaster in Benue State have finally settled down to camp life as the state government at the weekend declared open the new Makurdi ultra-modern international market to serve as a temporary shelter for the displaced.
The move followed a directive issued by the state deputy governor, Engr. Benson Abounu, that the market which is yet to commence commercial activities be made available for the flood victims.
Our correspondent who visited the place observed that the camp houses families displaced from Wurukum, Wadata, Gyado villa, Terwase Agbadu and Kyabis hotel areas of Makurdi metropolis.

There was also heavy presence of security men. Mr. Johnson Iyorter, a retired military officer alongside his family now takes shelter in the camp after being displaced by the flood from their home at Gyado villa near Judges Quarter.
“The camp is well organised and we are very comfortable here.

We are expecting provision of water, light and food,” he said. Iyorter appealed to the state government to build flood victims affordable houses on higher grounds so that they can permanently relocate from water prone areas in order to avoid the yearly repeat of the ugly trend.

Similarly, Isiaka Momoh and his family of six, who fled their Wadata vicinity to the camp two days after it was established, applauded the efforts of the state government, saying that the environment was quite befitting and well ventilated.
Momoh however wants quick intervention in the provision of adequate toilets, bathrooms and refuse dump to meet the growing demands of the victims in the camp.

Buhari's ministers to emerge today; see who may be appointed from Benue