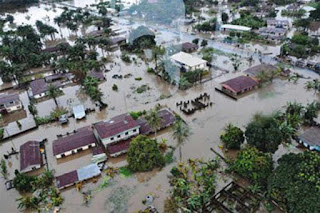 Benue State Commis­sioner for Water Resources and Envi­ronment, Engr. Nick Wende, has assured residents of capital city and its environs that the intermittent flooded occasioned by blockage of water channels and drain­ages will soon be a thing of the past.
Speaking with National Mirror at the weekend, Engr. Wende disclosed that efforts have been intensi­fied towards eliminating the impediment which always posed as bottleneck to free flow of water channels in the state.

He explained that the state government has al­ready released funds to­wards tackling the menace, stressing that appropriate measures have been taken to restore water supply to Otukpo and Katsina-Ala as well as Gboko, with the resumption of their water works to tackle the acute wa­ter scarcity in these areas.

He also maintained that soonest they would start pumping water to those in the capital city and beyond, adding that substantial funds have been released to resolve the inadequacy of water shortage in the state.
The commissioner also added that the N14 billion contract awarded for the re­ticulation to pave the way for suppliers of water through­out the state has also been beaten down through tender arrangement to N10 billion.

Engr. Wende empha­sized that the contract for service maintenance and water supply to designated areas in the three senatori­al districts of Benue State, inherited from the former administration at the cost of N1.9 billion has also been slashed down to N1.3 billion out of which N300 million has already been mobilised to the contrac­tors and they have since resumed water supply to consumers at appropriate areas in the state.