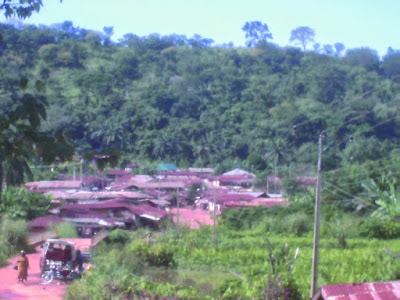 Residents of Adu Owukpa, a suburb of Ogbadibo LGA of Benue were recently stunned after a member of the NYSC whose identity was given as ‘Corper Shandy’ imported homosexuality into the community. Shandy, who was attached to one of the top secondary school in Itabono area of the village was caught red-handed sleeping with a 10-year-old boy in his apartment.

Idoma Voice gathered that the suspect is found of inviting male students to his house to do some domestic chores. However, on that fateful day, the corps member took the immoral path when he pinned his fellow man to bed for sex.

Narrating his ordeal to bewildered residents, the victim, whose identity was given as Andrew said on reaching the ‘coper’s’ lodge, he was offer garri to drink. “After I took the garri, I felt dizzy and slept off. The next thing I saw was Coprer Shandy naked and was trying to insert his manhood inside my anus.

“I couldn’t bear the pain so I cried out and a woman who was fetching water behind the house heard my voice and raised alarm and people rushed down to rescue me. The swift intervention of some community elder saved the suspect from being stoned to death by irate youth. He was subsequently dismissed and redeployed from the community.

He was subsequently moved from the town to Makurdi, Benue State capital where he finished his service.

Efforts to reach the principal of the college, could not yield any fruit. However, when Idoma Voice contacted the Benue State Police PRO, he denied knowledge of the ugly development.

Meanwhile, when our reporter contacted the immediate past councilor representing Ehaje Ward 11, Hon. Fred Apochi, he also denied knowledge of the incident, saying that he was in the village recently and nobody told him about it.