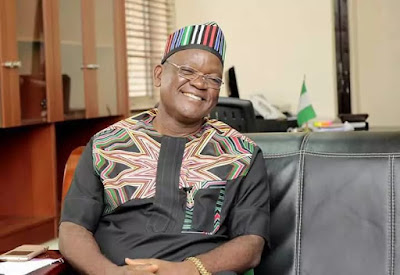 Benue State Governor has said his administration is not of this world but from God, adding that God was now in charge of the state, not him.

He said this yesterday while addressing members of the State chapter of the Pentecostal fellowship of Nigeria, PFN when he hosted them at the Benue People’s House in Makurdi.
The Governor expressed joy over their visit said his government came into being in fulfilment of God’s plan for him and the state. He explained that the motto of his administration “In God we trust” was a testimony of that fact.
Governor Ortom appreciated the members of PFN for their prayers. According to him, their prayers has indeed lifted him above enemies who are bent on frustrating the efforts of his administration.
The occasion was well attended by members of all Pentecostal churches in Benue state.

Ortom is a mistake, he’s a disgrace to Benue State – Tsav

Ortom is a mistake, he's a disgrace to Benue State - Tsav