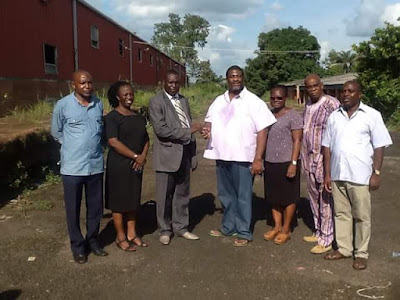 Following the public-private partnership drive of the present administration in Benue State, Governor Samuel Ortom is expected to flag-off the resumption of activities at the Benue Burnt Bricks, Otukpo in a few weeks from now.

The Otukpo born entrepreneur stated that he will not renege on his promises to revamp the company, saying that he was committed to adhering strictly to the terms and conditions of the investment agreement his company signed with Benue State Government a few days ago.
He said that in the next couple of weeks, he will be inviting Governor Ortom and his cabinet to come and perform the flag-off ceremony.

Speaking before handing over the keys of the company to the investor on behalf of the Government and people of the state, Commissioner for Industry, Trade and Investment, Dr. Tersoo Kpelai assured the investor of an enabling environment and support for him to succeed.

He said the decision to lease the company to the investor was borne out of the desire and commitment of the Ortom led administration to diversify the economy by revamping all the moribund industries owned by the state. He added that the Governor’s industrialization policy is targeted towards agro-processing and solid minerals exploration.

Dr. Kpelai sued for prayers and support on the side of the Benue people particularly the host community for Governor Ortom and called on the investor not to disappoint the state.
It will be recalled that, the Benue State Government last week signed an Investment agreement to handover Otukpo Burnt Bricks to Greengold Exploration for a period of 15 years.

Part of the agreement is to employ 1,200 Benue youths and pay a yearly percentage to the state Government.
Dr. Kpelai was accompanied by the permanent Secretary of the Ministry, Mrs. Helen Atom, Director of Industry, Mr. Matthew Otache, Desk officer of the factory, Mr. Kennedy Igyoo to perform the handing over ceremony.