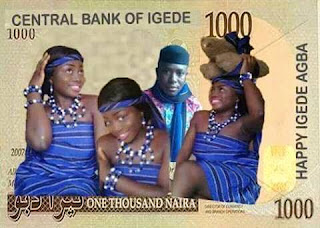 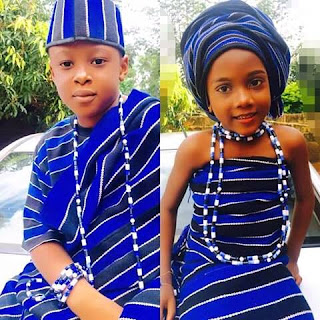 The Igede people are a Sub-Saharan people found in Oju, Obi, parts of Gwer Local Government Areas of Benue State and Cross River State of Nigeria. The 1999 census puts their figure at 373,000 speakers whose major preoccupation is farming and hunting. They are a minority tribe in the Benue belt, traditionally rule by the “AD’UTU”
The Igedes had their own traditions before the advent of colonialism and Christianity which has greatly influenced their way of life, with 88 percent practicing the Christian faith while 22 percent practice their traditional religion.
Amidst eroding cultures and traditions, the Igede of Benue state have maintained some aspects of their culture, one of which is the annual Igede Agba New Yam Festival which is celebrated during the harvest of yams to mark the beginning of the harvest period.

Igede Agba New Yam Festival is a yearly cultural occasion that is celebrated among the Igede people at home and in Diaspora. It is a cyclic festival that comes up every first Ihigile market day in the month of September. According to the Igede calendar, September is her seventh “moon”, a very special number at that. 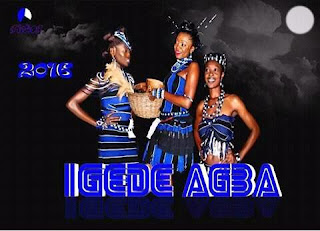 The activities at Igede Agba include eating of pounded yam, cultural music, dancing and other forms of cultural displays. The occasion also witnesses the drinking of locally brewed drinks from millet and guinea corn called Apio, Ogbete, Oburukecta, Ogene and others with different alcoholic content.
The history of Igede Agba New Yam Festival dates back to the arrival of the Igede at their present place of abode. The Igede origin according to oral tradition can be traced to a great ancestral father called Agba, the progenitor of all Igede people. It is after this man that the Igede New Yam Festival is named.

According to the paramount ruler of Ora, HRH Chief Matthew Ehijagong Imuna, the Ohain 1, Oje of Orah Land, Agba is the ancestral father of the Igede people, Agba and his descendants are of the royal throne of the popular Benin Kingdom, and that Agba was a renowned native doctor who traveled widely. Agba was also said to be fond of a musical instrument called “Ogede”. From there the name Igede probably came from.

The Igede people are believed to have been led by one Irumanyi as they traveled east ward until they came to the bank of Oyongo River with seven tributaries. The river parted ways for the people to cross after they performed some rituals as demanded by the oracle. They crossed to the other side of the river called “Utukenge”, where the Igabu, Opirikwu, Anyogbe and Ikwuro people of the present Ogoja in Cross River State, who were part of this migration, parted from their Igede kith. The Igede continued their journey to Ipinu Igede, their present abode from where each clan moved to its present location.

The reawakening of this age long tradition is attributed to the formation of the group, Igede Youths Association (IYA). This group introduced the Igede Day to celebrate the goodness of God for a good harvest and the beginning of the planting season. This is because the major preoccupation of the Igede people is the cultivation of food crops such as yams, cassava, rice and cereals. The size of an Igede man’s yam farm is a manifestation of his wealth and a widely acclaimed farmer in Igede is called an Ogreji.

Igede Agba festival is a special period for praising God, it celebrates hard work and dignity of labour. Moral values such as honesty, goodness, social justice as well as respect for the cultural of the people are celebrated.

Yam, the king of all farm produce, is used to mark the occasion of harvest and the new plating season. As such, harvesting of new yams before it is declared free for harvesting is a taboo. Every Igede man is expected to celebrate the festival with yams from his farm, not bought from the market. There is nothing fetish in the celebration of Igede Agba. The Akpang deity in Igede ensures the suppression of the activities of witches and wizards. It is a deity that keeps people away from harvesting their yams prematurely; however, it is not considered as the god of yams.
During and immediately after Igede Agba, families are expected to eat only pounded yam but not the usual fermented cassava, popularly called Akpu.

Igede Agba is celebrated with all male children gathering at the father’s round hut called Ugara, while all the man’s wives gather together with all female children in the most senior wife’s hut. The father usually washes his hands first, followed by the most senior son and that is how the eating proceeds. Nobody is allowed to jump queue. Those who disobey may be stopped from further eating. Meat is usually shared after meal or somewhere close to the end of eating of pounded yam.

At Igede Agba periods, communal development projects are usually planned for execution. This is also the period various households address all pending cases of misunderstandings and such are amicably resolved. Plans for next planting season are concluded, especially the arrangement for the head of the household to organise for communal planting of his yam heaps. By this, all the mature male children would go to the farm on a given day. This is traditionally how an Igede man is able to plant many hectares of yam.

The Igede Agba to an Igede man is an all- important festival whose relevance cannot be over emphasized. For instance, the coming together of a family brings about unification. It also mobilizes the people towards purposeful development. Disputes that would have lingered are addressed as a family and not in proxy as everybody is present. There is no room to harbour grievances.

Secondly, the idea of washing hands together in one basin by the family members sometimes, including extended families, is an unwritten covenant. This covenant is an agreement to remain united, and not to harbour any bad feelings against each other. After Igede Agba, families unite and farm for the elders in a group, one after the other. All the male children do this happily.

During the celebration, awards and honours are bestowed on the farmers who have cultivated the largest farms or have the biggest yams or the most number of yams in their barns. This is a very open, free and fair competition and it helps to stimulate hard work and development.

Igede Agba is considered a time of peace, reconciliation and sharing. No one eats alone on Igede Agba day. You must have a friend to visit or one to visit you. Hence as part of the preparations, it is mandatory you clear the foot path between you and your neighbour’s house. This is saying “you are welcome to visit or stop over to eat’. Exchange of gifts and food is done with enthusiasm and joy. The Igede man is truly at his best during the Igede Agba period.

As children come home for the celebration, parents sit them down and evaluate the progress made by the children in the cities over the year(s) and recall home those who are on the decline in terms of productivity and character.
Since the celebration comes up before schools re-open, it also serves as a forum to recognize siblings who have gained admission into tertiary institutions and those who have graduated from such schools.

PDP vs APC: NJC must call Justice Omotosho to order for impunity in Benue – Group