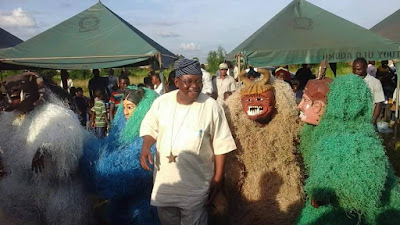 Benue state government on Saturday promised to revive Igede Agba new yam festival by promoting it to a state, national and internationally recognised cultural festival, to attract tourists.
Governor Samuel Ortom made the pledge at Oju LG Pavilion when he addressed sons and daughters of Igede nation and well wishers from all walks of life who gathered for the celebration of 2016 Igede Agba new yam festival.

Represented at the occasion by the state Commissioner for Information and Orientation, Chief Odeh Ageh, the governor said being committed to the development of socio-cultural groups and tourism sector, he was poised to so promote Igede Agba festival which he acknowledged had come of age.

The governor in the occasion gave a brief account of his stewardship to the Igede people saying that despite the prevailing economic and financial challenges, his administration had been able to mobilize back to the site of the abandoned Oju-Utonkan road.

He also said that there were issues with the contract for the construction of Obarike-Alide road which he said his government was pursuing to get the contractor handling the project back to site.
According to the governor, he had informed the public in several fora that it was assumed that after the previous administration had fully paid for the road construction , the road had been done, whereas it was not.

He said his government had a couple of days ago flagged off rural electricity and other community development projects at Uchenyum community in Oju LG in his rural/communities development drive, promising that more would come their way.

The governor, therefore, tasked the Igede nation and the entire state to exercise patience with his government while praying for the current economic recession to ease off, even as he said he would ensure that he impacts every community with one project or the other.

The festival drew many people from all walks of life from home and abroad to the Igede land.

In their separate remarks, Igede tradition chiefs led by Ad’ Oju and his Obi LG counterpart , Chief Cyril Okwute, preached peace love and unity without Which they said it would be difficult to move Igede and the cultural festival to the next level.

Nigeria mobile telecom giant, MTN one of the sponsors and partner in the festival added colour to the event
For Advert: Call 08171607004, 09058228464 Follow us on Twitter @idomavoice, @idomanews Send us releases at idomavoice@gmail.com