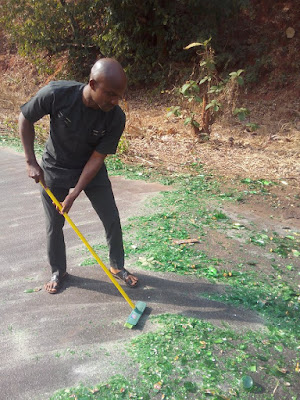 Hon. Paul Abah, the newly sworn in Caretaker Chairman of  Ogbadibo Local Government Council resumes duty yesterday at the Local Government Secretariat Otukpa.
He started off his duty by dedicating the council to God. He led everyone present in thanksgiving songs, praises and prayers.

In his pep address to the staff, friends, and party loyalists, he promised to carry everyone along in his effort to deliver the change agenda to the people of Ogbadibo Local Government. He told the crowd that he cannot afford to fail the people of Ogbadibo in this assignment he was given.
Insisting that he owes it to the Honourable Minister of Agriculture, Chief Audu Ogbe, the Incoming Senator of the Zone, his immediate family and the entire  people of Ogbadibo not to fail.

After the handing over, the chairman performed his first assignment at a location along the Odoba Hills in Otukpa where a portion of the road was covered with broken bottles. He led members of staff and leaders of the APC in the Local Government to clear  away pieces of broken bottles from a portion of the highway at Ofoba hills.

No regrets having a child before marriage – Nollywood actress, Ene Miltex