Nigerian Army one of the best in the world – Ortom

Nigerian Army one of the best in the world – Ortom 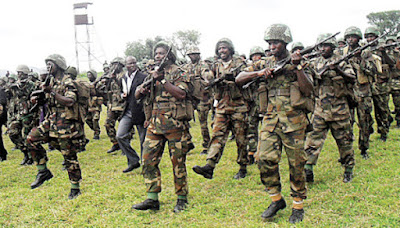 Benue state governor, Samuel Ortom, has commended the Nigerian Army for decimating Boko Haram in the North-East and restoring peace in Benue where herdsmen held sway for some years.

Ortom who was represented by his deputy, Engr Benson Abounu, during a courtesy call by the Chief of Army Staff, Lt General Tukur Yusuf Buratai, at Benue People’s House, today, said within a short time, the army under the leadership of Lt General Buratai, was able to dislodge Boko Haram and reduce it to infinitesimal size.

The governor described the present Nigerian Army as one of the best in the world, pointing out that it is made up of well trained elites.

He said the army has been able to check the excesses of herdsmen who destroyed 14 of the 23 local government areas in Benue state with many of the displaced persons forced to take refuge in places other than theirs.
Governor Ortom said even as relative peace has returned to Benue, there are places where herdsmen still occupy.

He commended the army for aiding some communities, executing some projects in some of its establishments and holding its conference in the stat.

According to him, as a state that has many military formations, Benue would continue to give necessary support to the army to enable it defend the nation’s territorial integrity and maintenance peace.

Buratai said he was happy for the conducive environment provided for officers and men of the Nigerian Army to operate in Benue state and assured that Nigerian Army would continue to maintain cordial relationship with the state government.

Present at the courtesy call were the Acting Secretary to the State Government, Dr Bem Melladu; members of the state executive council, directing staff in the office of the chief of army staff and heads of some military formations including the commanding officer, 82 Division, Enugu.