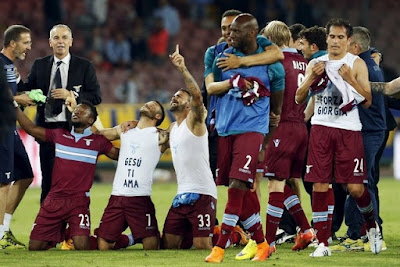 Late goals by Ogenyi Onazi and Miroslav Klose rubber-stamped Lazio’s third-place finish in Serie A on Sunday after a thrilling 4-2 win at Napoli that secured a place in next season’s Uefa Champions League playoffs.

With Juventus and Roma having secured automatic entry to the Champions League, Napoli required no less than a win at the San Paolo to leapfrog Lazio into third place and qualify for the competition’s playoffs at the capital club’s expense.

But after launching a second-half fightback thanks to a Gonzalo Higuain brace after early goals from Marco Parolo and Antonio Candreva had given Lazio a 2-0 half-time lead, the Argentinian blazed over a penalty minutes later — his fourth miss from the spot this season — to allow Lazio back into the game.

Benue State in the news: Ten things happening in Benue this new month