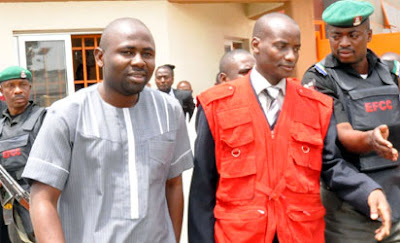 The sacked member of the house of representatives, Herman Hembe has stated that he has spent all the salaries he collected as a member of the lower legislative chamber.
Hembe said this in reaction to the order of the Supreme Court which compelled him to refund the salaries.
Recall that  the Supreme Court had on June 23 sacked Hembe as the lawmaker representing Vandeikya/Konshisha federal constituency of Benue state.

The five-man panel of judges led by Walter Onnoghen, chief justice of Nigeria (CJN), declared Dorathy Mato, an All Progressives Congress (APC) aspirant, as the winner of the primary election of the party in that constituency.
Hembe complied with the order and even paid the N700,000 awarded against him.
But in an affidavit dated July 18, Hembe said he used the salaries he received for the upkeep of his family.
“I have tried very hard to raise a loan to enable me comply with the above order of the honourable court, but have not yet succeeded,” read the affidavit.
“This honourable court in its judgement declared the primaries conducted by the 2nd respondent from 7th to 10th December, 2014 null and void and this granted the appellants relief four in her originating summons as reproduced in the judgement’s of this honourable court
“The court in its judgement struck out the appellants grounds of appeal numbered 1, 2, 6, 9, 10, as well as the appellants issues 2 and 3 in her brief of argument and issue 2 of my brief of argument, the issues having been distilled from grounds of appeal that had been struck out.
“The appellant’s notice on appeal and brief of argument and the briefs of 1st, 2nd and 3rd respondents are exhibited herewith am marked exhibits B, C, D, E and F respectively.
“I am applying to this honourable court to set aside the consequential orders against me. I had raised a preliminary objection against the appellant’s originating summons, which was upheld by the trial court and court of appeal, but was overruled by this honourable court.”
He said he had evidence to disprove Mato’s allegation and show that her claim was false but he was advised by his lawyers that filing a defence would amount waiving his right to raise a preliminary objection.