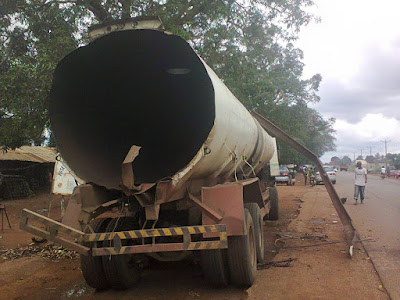 An eyewitness who gave his name as Onyebuchi Eze narrated how the incident occurred thus.
On a circumstance which baffled all eye witnesses occured as a blast that resemble the sound of bomb blast took place this morning in a town called Taraku in Gwer East LGA, Benue state.

The blast emanated from an empty tanker with its plate number {ABUJA (ABJ-298-XU)} which parked for a welding repair beside Otukpo-Makurdi expressway in a centre called OLD GARAGE in Taraku town.

It took place few minutes pass 11 am this morning. Although, the debris of the exploded empty tanker went as far as up 300 to 400 meters, but God Almighty saved people of Taraku this morning.
Two persons were wounded, the welder himself and another small boy of about 7years were hit by the debris of the exploded tanker.
If any reader knows Taraku, the incident happened in the new orange selling centre with Ejifa motors monitoring team checkpoint close to the place. As you can see the pictured attached to the report, the whole of the pan used to cover that back of the tank was removed in the blast and flew to a beer joint along the expressway some 350 meters behind the exploded packed tanker and descended inside the beer drinking hut.
But nobody was seated in the beer hut for drinking as it is still early morning. If not, judging by the weight of the pan, it is capable of killing all that would have being sitting inside the beer palour.
Reports are still coming from places where the debris of the exploded tanker reached inside the town and things it damaged but nobody die except the critically wounded 7 years old boy whom it is only God will save him.
In nutshell, it was a moment of confusion in Taraku this morning.
That is the God averted tragedy in Taraku this morning.