Vigilante sentenced to death by hanging for jungle justice in Benue

Vigilante sentenced to death by hanging for jungle justice in Benue 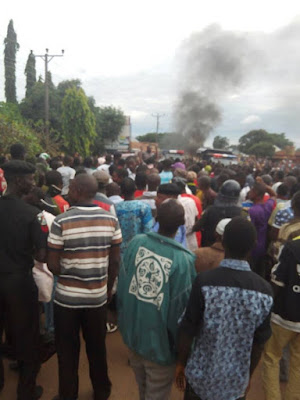 The Supreme Court has sentenced a member of a local vigilante group in Benue State, Moavega Igba, to death for killing one Kyernum Kervo 15 years ago for stealing goat meat.
The convict was charged alongside one Michael Ankpergjer before the Benue State High Court, Makurdi, for causing the death of Kervo.
Narrating how it all started,  Justice Kumai Akaahs after Kervo was arrested for allegedly stealing goat meat, the convict and his co-conspirator conducted a local trial, found the suspect guilt, and eventually took him to a riverside.

Justice Akaahs said: “On reaching their destination, the accused tied the deceased’s legs and laid him on the ground. They then spread the palm leaves over him and set him ablaze.”
‎The case was eventually reported to the Divisional Police Office in Konshisha Local Government Area of Benue State by relatives of the deceased.
“The man was dead and early decomposition had begun,” Justice Akaahs said.
The convict initially confessed but later said that his statement was made under duress, following which a trial within trial was conducted to ascertain whether he was forced to make the statement.
One of the witnesses, Ayakpa Ayo testified that he had killed the goat for his in-law who came to attend the funeral of his brother, Agena Mua.
The convict was charged with murder before a Benue State High Court and was found guilty. His appeal to the Court of Appeal to overturn his conviction also failed. He finally appealed to the Supreme Court.
In rejecting his appeal, Justice Akaahs held: “There was therefore overwhelming evidence to support the conviction and sentence of the appellant and his co-accused to death for conspiracy and causing culpable homicide punishable by death.
“The appellant’s action with the co-accused of setting the deceased ablaze for stealing goat meat was bestial and it brought out the pristine savagery in man depicting his brutish instinct in a Hobbesian state of nature.”

Farmer docked over alleged illegal possession of firearm in Makurdi