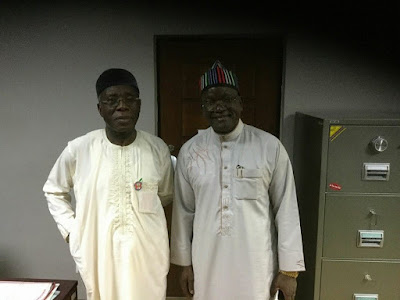 By Prince Ogboji Ogboji
A chieftain of the ruling All Progressives Congress from Benue State, Hon. Chief Johnson Agada, has lambasted the ]state governor, Dr. Samuel Ortom, for calling for the head of Audu Ogbeh at the height of the recent attacks on Benue by suspected Fulani herdsmen.
Agada said the attacks on Ogbeh by Ortom’s praise singers were uncalled for because the governor was probably at a motor park in Gboko, Makurdi or Gbajimba when the elder statesman was Minister of Communications in the 80s when Alhaji Shehu Shagari held sway.
Chief Agada stated this in the early hours of Saturday via his social media platform while reacting to the alleged rift between governor Ortom and Ogbeh over the recent alleged Fulani herdsmen attacks on two communities in Benue State
The governor had in a meeting accused the Minister of Agriculture of not being truthful to President Muhammadu Buhari on the true state of the attack on the two Benue communities.
Agada questioned why should a failed governor like Ortom mobilize some Benue people against Chief Ogbeh who had fought tooth and nail to bring federal presence to the Benue valley
His words, “I just read one Stephen Akuma describing the trio of Chief Ogbeh, governors Lalong and Bello of Plateau and Kogi States as ‘Efulefu’. I don’t know the meaning of Efulefu in Tiv language but in my Idoma dialect, an Efulefu is a useless person who is of no value to himself or herself and the society in general. Chief Ogbeh is not by any stretch of imagination fit into Akuma’s description above.”
Agada recalled that the honourable Minister of Agriculture, Chief Dr. Audu Ogbeh was a senior lecturer with A.B.U. Zaria and later head of department of Murtala College of Arts and Sciences (MUCAS) -now Benue State Polytechnic, before venturing into politics in 1979 on the prompting of his Otukpa people who asked him to contest election into Benue State House Assembly representing Otukpa State Constituency which he won and became the deputy speaker of the house, a position he held till 1981 when President Shehu Shagari appointed him as the cabinet minister of communications and reappointed him again in 1983 after Shagari’s re-election.
“The Ortom whom Akuma is struggling to defend was at this time an agbero in the park at various garages in Gboko, Makurdi, Gbajimba etc. Ortom himself acknowledged being lifted by God from the motor park as a garage tout.”
Agada who said he has no authority to speak for the two middle belt governors, mentioned in the demeaning post by one Stephen Akuma, noted that “but I know Gov. Ortom cannot equal Gov. Simon Lalong  (Mr ALERT) who has been scored higher in terms of salary payment and infrastructural development
Agada declared that the state wage bill as at the time former Governor Suswam left office in 2015 was N2.6b according to the Kpojime Committee report, a committee set up by the Governor Ortom led State government.
The APC chieftain further expressed shocks that the Governor who told them during a stakeholders’ meeting that he was saving cost -having reduced numbers of Commissioners from 20 to 13, Advisers from 28 to 15, SSA and SA from over 300 to less than 100 would declare that the salary wage bill for the State grew in geometrics from N2.6 billion to N7.8 billion without any official employment since he came on board as governor of the state.
Agada advised Governor Ortom to halt any attempt to use  the Hon. Minister of Agriculture as a scapegoat for his incompetence, stressing that the Agric Ministry under Dr. Audu Ogbeh’s watch is the most vibrant ministry in the current dispensation
He urged the governor to as a Christian rise above being the Nyamkiume Nzorov and take the entire Benue as his constituency instead of this tribal and clannish bigotry he is engaged in
“When the Idomas lost over 700 innocent souls in Agatu, the governor never declared mass burial or public holiday to mourn their deaths but as soon as his council ward in Nzorov was involved, it became Benue problem and the president of the republic must be insulted. During the Agatu massacre, Governor Ortom took Governor of Nasarawa State to Agatu in a chopper to convince Agatu people to cede the land to fulani.” The statement read in part
Agada accused Governor Ortom of frustrating the Agric Minister’s efforts to bringing a lasting solution to the farmers/herdsmen perennial crisis, adding that those excuses meant to persuade Benue workers from asking for their 9-11 months salary arrears are no longer tenable, stating that the governor must go and pay his workers salaries instead of trying to compare himself with Chief Dr. Audu Ogbeh who’s known for his competence and integrity.