Reports has it that an investment platform that claims it focuses on football and works with William Hill, a global online gambling company based in London, England, to integrate probability and statistics, 86FB or known as 86FB football, has crashed.

86FB football crash is coming after a number of high-profile Ponzi investments have crashed in Nigeria in recent times. The football investment platform which claims to be owned by City Football Group also has been discovered to not be owned by the Abu Dhabi-based company which owns Manchester City Football Club in England.

Recalls that the Economic and Financial Crime Commission (EFCC) recently announced it is set to arrest four Ponzi scheme operators across Nigeria within the next few weeks.

“We are coming for the operators in a matter of few weeks and most of them operate largely in Lagos but reside outside the commercial hub of the nation. They believe they are smart but the Eagle is watching and they will be charged to court in a matter of days.

“These fraudsters have reaped several Nigerians off their hard-earned money while others have lost their lives due to the shock they got when they realised they have been swindled. We have also observed that a lot of the Ponzi schemes thrive, especially during a recession or economic hardship, but we will also choke them as they are only out to entice Nigerians with some fixed returns only to disappear in a few months or years,” EFCC source said.

What is 86Fb football investment platform?

Newsonline reports that the 86Fb football investment platform claims it “Focuses on football and works with William Hill to integrate probability and statistics. Calculations, mathematics and other principles make competitive football not only a game but also a high level comparable to funds and stocks.

The investment platform says it runs a hedge fund arbitrage method that combines finance and conceptual science to earn stable returns with extremely low risk in sports gambling.
Some of its agents also claim it runs a reverse betting site investors can earn 3% of their capital daily (90% monthly ROI), if they play the game plan provided by the team.
A possible crash of the Ponzi scheme: 86Fb football

All the promises of juicy returns on investments by 86Fb indeed sounded too good to be true as some Nigerians for weeks have been warning invest ors of the possible crash of the football investment scheme.

Last week, a Twitter user @iamjonado warned that was a ticking time bomb. He tweeted, “86Fb or 86 FOOTBALL like y’all know it is a big-time BOMB.

“The “makedup” Ponzi scheme in form of investment has found its way through Whatsapp groups, telegram, Facebook and even Twitter has been greeted with the emergence of a sudden high paying investment platform” he wrote. 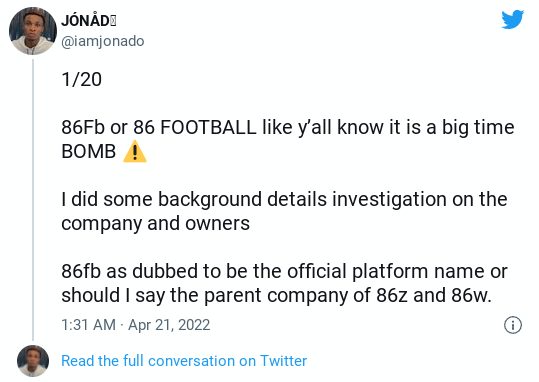