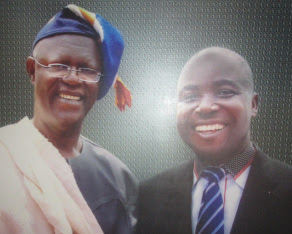 Deputy Speaker of the Benue State House of Assembly, Hon. James Okefe, has dismissed as baseless and unfounded the wild publication by an online newspaper, the Nigerian Concord, authored by one Aare Abiodun Oluwarotimi alleging that he (the Deputy Speaker) had declined an invitation by the Deputy Governor, Engr. Benson Abounu to join a cult group as a pre-requisite condition given by the Deputy Governor to support his political career.

Hon. Okefe said the spurious publication was borne out of sheer mischief and described it as a calculated attempt to sow seeds of discord between himself and Engr. Abounu and, by extension, set current prominent political figures from Zone C and their supporters on the slippery slope of unending conflict with one another.

The Deputy Speaker wondered why anyone would contemplate churning out such blatant falsehood just to malign his own person and that of Engr. Abounu whom he holds in very high esteem both as a father and the political leader of their party from Zone C.

The Deputy Speaker dismissed the claim that the Deputy Governor bankrolled the process of his clinching his party’s nomination as its flag bearer in the 2015 race for the Benue State House of Assembly adding that the damning write-up was only a figment of the writer’s imagination. He urged members of the public to discountenance the unfounded claims as no such unsavoury scenario ever played out between himself and the Deputy Governor.

Hon. Okefe used the opportunity to, once more, call on all Zone C sons and daughters and, indeed, the entire Benue State to shun such divisive antics and acrimonious tendencies capable of clogging the wheel of the much-needed progress which they have to make collectively as a people. The Deputy Speaker stressed the need for Zone C leaders and their supporters to forge a common front for peace, unity and progress of the zone.