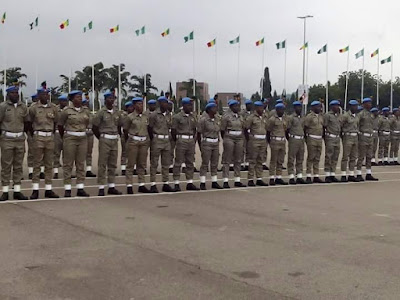 Over two months after Justice Gabriel Kolawole of Federal High Court in Abuja ordered immediate opening of the National Headquarters of Peace Corps of Nigeria (PCN), another Judge of the Federal High Court, Justice John Tsoho, has declared as “an act of illegality”, the continuous sealing of the said office by the Police.

The corporate headquarters of the Corps located at No 57 Iya Abubakar Crescent, off Alex Ekwueme way, opposite Jabi Lake, Jabi, Abuja, had been under lock and keys since 28th February, 2017, when the Police raided the premises and arrested the National Commandant, Amb (Dr.) Dickson Akoh and 49 other officers.

The Nigerian Police had, however, denied sealing the office before the Federal High Court in Abuja.

Counsel to the Nigerian Police in the ongoing amended criminal charge against Akoh, JC Idachaba, had on 8th November 2017, moved a motion, asking the court for an order to seal the National Headquarters of PCN.

The motion of notice which was filed on the 4th of October, 2017, has 16-paragraph affidavit deposed to by one Sergeant Philip Tsumba and 17-paragraph written address.

Idachaba denied the fact that the office had been sealed ab initio, saying the Defendant Applicant could not produce any evidence to compel the court to believe that the office was sealed.

On his part, Counsel to the PCN and Head of Chief Kanu Agabi Chambers, John Ochogwu, in an emotion laden voice prayed the court to help unseal the office as his client, the PCN had suffered hardship since the office was sealed 11 months ago.

Chief Agabi, had also filed a motion on notice on 6th October 2017, seeking an order of the court to unseal the Peace Corps office.

The motion which was supported by 20-paragraph affidavit deposed to by one Barr. Ogar Christopher Ogar with written addresses and 4 exhibits, said the Nigerian Police had sealed the Peace Corps office since the day it raided the premises February 28th 2017, when the National Commandant of the Corps, Akoh and 49 others were arrested.

Barrister Ochogwu tendered picture evidences, showing the office was under lock and keys with heavy presence of the Nigerian Police and Police Van.

He prayed the court to mandate an officer of the court to visit the said office with the view to ascertaining the veracity or otherwise of the claim that the Police sealed the office.

Delivering his ruling on the application by the Police to seal the already sealed Peace Corps Office, Justice Tsoho, on Monday declared that the applicant was seeking an order to “legalise the illegality” it has committed 11 months ago.

He berated the Nigerian Police for not have approached the court to seek order to seal off the Peace Corps office before taking it under lock and keys.

The Judge therefore, declared the continous siege on Peace Corps office illegal and ordered that “the office be unsealed forthwith”.

Reacting to the judgement, the National Commandant of Peace Corps of Nigeria, Amb (Dr.)  Dickson Akoh said the Police had no option than to obey the court judgement.

“If the Police wants to continue to prosecute criminal cases in court or press charges against anyone in the court of law, then it must obey court judgements”, Akoh said