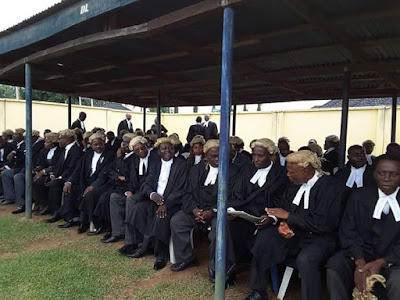 Moved by the number of, and plight of most inmates in Nigerian prisons awaiting trial, Benue state Governor, Samuel Ortom has made a strong case for faster judicial trial to save the inmates the trauma of long, painful and sometimes, wrong incarceration, which permanently impair them psychologically.
Governor Ortom who advocated continuous adjudication of each case till it is disposed off by the judicial officers instead of the present situation where a case could drag on for more than 8 years without any hope of final resolution spoke through his deputy, Engr Benson Abounu at the celebration of the 2016/2017 Legal Year in the state.

Governor Ortom who said that our law does not provide for compensation to inmates wrongly imprisoned stated that the expeditious disposition of all cases, particularly criminal ones should be pursued; assuring that the government would support the judiciary and do all that is necessary to make the work of judges easier.

On the fight against corruption in the state, Governor Ortom debunked the insinuation that it is targeted against only the opposition, stating that it is “totally inclusive” and non-partisan.
He disclosed that when the Government’s White Paper on the Justice Kpojime Commission of Enquiry indicted a senior member of the government, he was relieved of his position, the same thing happened when another senior official was implicated in a criminal case.

He stated that whereas another government would have covered or shielded those indicted, given their positions in government, the present adm inistration chose not to do so. Rather, it looks at everybody and everything inclusively in its fight against corruption.

Governor Ortom commended the judiciary for standing up as partners in the development of the state and assured that though the economic recession is biting hard, the government is obliged to pay salaries and offset the infrastructural deficit in the state.
He enthused that in a few months’ time, the government would clear the arrears of salaries owed workers in the state.

The state Chief Judge, Hon. Justice Iorhemen Hwande who declared the legal year opened, commended the excellent relationship between the bench and the bar and called for continuous responsible conduct by judicial officers in the discharge of their duties.

Justice Hwande who praised senior lawyers in the state; 11 who were honoured by the state judiciary called on them not to leave courts in the state, adding that their recognition as worthy ministers in the temple of justice was not a send-forth party but an attempt to infuse in them a sense of belonging to the state. The occasion was also graced by the state Attorney General and Commissioner for Justice, Hon. Barr. Michael Gusa.