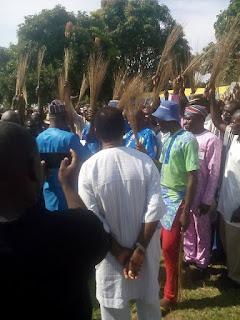 Elder Thomas Ano, Godwin Donko,Dennis Ano and Mr Innocent Nyajo who are direct kinsmen to the governorship candidate of the People’s Democratic Party PDP in the last year governorship election in the State Prince Terhemen Tarzoor yesterday led thousands of their supporters to dump the People’s Democratic Party PDP for All Progressive Congress Apc.
Speaking at the occasion, the Governor of the State His Excellency Gov Samuel Ortom who was represented by Rt Hon Avine Agbom a member representing Makurdi North in the Benue State House of Assembly thanked the Mbayongu People for the wise decision they have taken to join Apc. 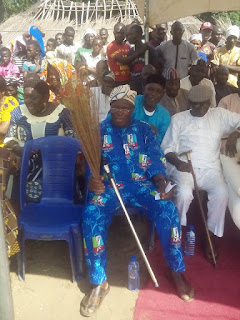 Governor Ortom added that the Mbayongu people will be given equal opportunity in the APCjust as those who have been in the party before. Gov Ortom narrated how Mbayongu is his second home owing to the fact that his grandmother originated from the community. According to him, he holds no grudges against Mbayongu who’s son contested the governorship race against him.

He stressed further that it was normal for Mbayongu People to choose Tarzoor ahead of him, he therefore called on Mbayongu people to close ranks with him in order to develop the State. Gov Ortom also stated that the big challenge facing his administration is lack of funds, but he is very optimistic that very soon his administration will overcome the challenges of payment of salaries since arrangement have been put in place to clear salary arrears. 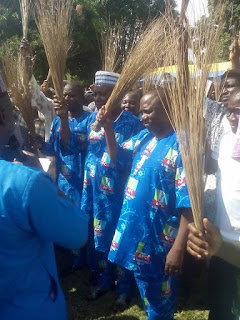 On their part, Chief Thomas Ano assured Gov Ortom of their total loyalty to his government, adding that both Tarzoor and Gov Ortom are their sons, and he sees no reason why Mbayongu people will still be in the opposition party one year after one of their sons has won the governorship seat. He also said that their departure from PDP has marked the end of opposition politics in Mbayongu.

Hon. Godwin Donko on his part stated that two of Mbayongu sons were in the race to govern the State, but Mbayongu people choose one ahead of other but since God doesn’t anoint a King from the Majority group, he choose Ortom ahead of Tarzoor. He therefore called on Mbayongu people to pray and support their son Gov Ortom to succeed in his divine assignment.

Earlier, the Deputy Chairman of the All Progressive Congress Apc Benue State, elder JT Orkaa and the Secretary of the Apc Makurdi Local Government Hon Tony Dyege introduced the decampees and gave them the baptism of Change. They also assured them of fair and equal treatment in the party.
Others who gave the words of advice to the decampees include the representative of Ityoshin Apc Leaders in Makurdi elder Simon Bai, the representative of Isherev Apc leaders Hon. Mike Adyo, While Elder Justice Utsaha spoke on behalf of Utyondo Apc leaders and Alhaji Indabagi spoke on behalf of Hausa Apc leaders in Makurdi, they all thanked the decampees for the bold steps they have taken to join the mainstream politics.

Hon. Avine Agbom who spoke last, was full of joy and excitements over the decision of his people to finally join him in mainstream politics. He therefore assured them that it won’t be long before he will start construction of Boreholes and other constituency Projects in Mbayongu community, he also advised Mbayongu people to shun politics of backbiting and acrimony.