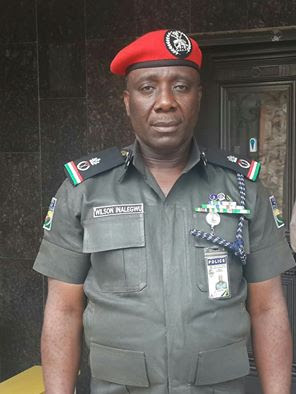 By Noah McDickson
William Shakespeare was right when he described three categories of humans.
Some people are born great, some achieve greatness while some have greatness thrust upon them.
Commissioner of Police, Wilson Inalegwu belongs to the second category of mortals. He had big dreams of becoming a legal practitioner, which drive his zeal and determination to read law at the prestigious university of Jos.
The young lawyer’s passion for securing human lives and disdain for criminality led him to join the Nigerian Police Force.
It would be a wry understatement to say that the able CP is a workaholic, an achiever and a crime fighter.
His prompt response to tackling armed robbery incidences earned him the name COMPOL 2,4,7 by the ace journalist, Ordinary Ahmed Isah.
When CP Inalegwu held sway as commissioner of police in FCT, Abuja and it’s environ, the incessant armed robbery cases, theft, one chance, bag snatching and others criminal activities were reduced to the barest minimum.
Like Napoleon the great, the gentle Wilson would engage criminals directly when called upon to do so.
He has displayed unprecedented temerity in direct confrontation with criminals. He declared the FCT a “no go area” for the criminal elements.
He would personally supervise the patrol teams unannounced to ascertain their level of commitment to the job.
Wilson is an epitome of discipline and sacrifice. A selfless and quintessential officer. An erudite officer and gentle man.
He is admired and respected by men and officers of the force because of his humble mien sociability. He is very patient with details when his junior officers present cases before him.
He strongly believes in the philosophy of “all men are equal in the eyes of God”. Thus, his reasons for being receptive to all.
Apart from the criminally minded people, his doors are always open to those who call on him.
The Benue born gallant officer with enviable track records of fighting crime, once confided in me that he loses sleep whenever he hears that a household has been robbed or a vehicle stolen by criminals.
Ordinary Ahmed Isah has consistently prayed for CP Inalegwu to get to the peak of his career, but the humble CP would simple answer, ‘but I thank God for where I am’ now’. He does not sound like a desperate person, but always appreciate God for every opportunity in life.
I therefore, join other Nigerians to wish him a long life to continue his good work of serving humanity.
As a friend and brother, I can only wish him the best and peak of his career. I salute you our gallant officer .