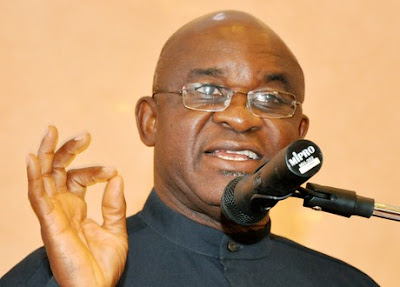 By James Ibechi
Ever since the sentimentality of ‘Idoma versus its external enemies’ surfaced from Sen. David Mark, as a new dummy for sale to the gullible in the Benue South Senatorial District, I have argued that though this is attractive on the surface, it is, nevertheless, a seriously bad product, and at the same time, a terrible fallacy which only a few discerning Idoma voters are likely to buy. D

The superficial attraction of the sentiment derives from the undeniable fact that power, since Benue parted way from Old Benue-Plateau way back in 1976, has never changed hand, from Tiv to Idoma. Neither to Igede. For, it has always being a Tiv man in power — to put it succinctly — as the governor of the state. And, as they say, the winner takes all attitude of Africans to governance has not helped matters. As such,  judicial and legislative powers have as well never slipped from Tiv to Idoma hands. And the worse?

There is no sign that Tiv political hegemonists are ever going to bat an eyelid any time, soon. So, for Sen. Mark and those who readily buy the new dummy from him, such is a sustained willful act of marginalization against the Idoma people. This is a deep-seated belief among Sen. Mark’s supporters. The counter argument often advanced by Tiv that “Majority carries the vote”, which is now a cliche, but a truism, has not swayed the minds of those who are dumb and blind for Sen. Mark.

For Mark, what that has meant is that by his removal from the senate through a judicial instrument, and for which he is apt to point accusing fingers on certain political hegemonists — whom he called external enemies of Idoma nation — including, according to him, the sitting state Governor, Dr. Samuel Ortom, from the Tiv axis of the state, the marginalization of Idoma is about to worsen, should Idoma make a costly mistake of not returning him back to the Senate in the forthcoming rerun in the senatorial district, which pits him against Daniel Onjeh, the man who got him sacked from the senate.


Elections, I know, are an intrinsically political process, and they are invariably hijacked by political or vested interests of one kind or another. This is what seems lost on the gullible.

Those of us who are not, know that Sen. Mark like other Benue politicians, also struggles for political power. And if in the course of that he makes political enmity, it makes me wonder how such enemies necessarily translate into enemies of the entire Idoma people. It goes without saying it that, to think so, is tantamount to committing a fallacy of hasty generalization. This is no wisecrack. The second face of this grisly lie — just before I forget — is the angle that Mark’s new political dummy is beginning to sell to the effect that the buyers are already warning Tiv people to steer clear of the Benue South politics. And this makes me laugh again!

How do you think that a Benue governor should be regarded as an interloper in the politics of a part of the state where he is also a governor, if this is not another embarrassing fallacy coming from Mark and his supporters, just to sheepishly curry vote based on sentiment?

This is aside the fact that, if it is Governor Ortom, Barnabas Gemade and George Akume who are apparently fingered as the external enemies of the Idoma people, are the ones asked to steer clear of the Zone C politics, the question then is, has Mark and his supporters forgotten that these ‘enemies’ have legitimate political interest and allegiance to pay to the All Progressives Congress, APC, to ensure their party’s candidate is successful in the rerun?

We all agree that we live in the age of reason and so we must not allow sentiments to triumph over reason, by asking: if Mark is truly a bulwark against the marginalization of the Idoma people in the state, in the 16 years that he has represented the Idoma at the senate, had he ensured that Idoma produce the state governor once?

Has his prolonged stay in the senate fetched Apa State for the Idoma people? Idoma people must ask these and similar questions before they are in again for a continued ride on them by one man whose self-worth is larger than life.
Merry Christmas.
Previous Post