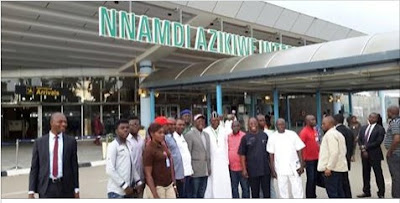 Benue State Governor, Samuel Ortom, today left the Nnamdi Azikiwe International Airport, Abuja, for New York in the United States of America where he is to address an event at the United Nations.
He boarded a British Airways flight with his Senior Special Assistant on Special Duties, Mr Abrahams Kwaghngu which took off at eight o’clock in the morning.
His Special Adviser on Development Cooperation, Dr Magdalyne Dura, and her Media and ICT colleague, Mr Tahav Agerzua, will accompany the Governor to the occasion. Governor Ortom had been invited by the Inter-Ministerial Committee of the United Nations General Assembly, to address one of the events at the 71st Session. The theme of the session is ‘The Sustainable Development Goals: A Universal Push to Transform Our World’.
He will speak on ‘Multi-stakeholders Engagement in the Implementation of SDGs in Africa: the Benue Experience.’ Benue State under Governor Ortom, became the first state in the country to meet requirements for accessing the 2015 round of Millennium Development Goals and Sustainable Development Goals conditional grants by paying N1.2 billion counterpart and obtaining a total of N2.4 billion.
The money has been deployed for the execution of numerous health and water as well as economic empowerment projects in communities across the state.
Speaking with Government House Press Crew Governor Ortom said he would also use the opportunity to engage with other development partners on how they could add more value to service delivery in the state. Seen off at the airport by government officials and other Benue sons and daughters, he is expected back towards the end of the month.