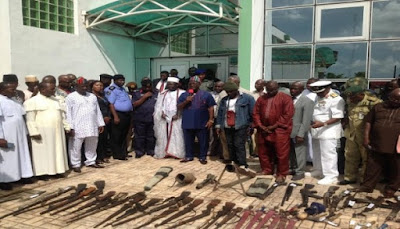 A suspected human trafficker, Israel Lame, is currently helping the Benue State Police Command with information on his illegal activities in Nigeria and Burkina Faso.
Lame was apprehended with two young women in Gboko area of the state by vigilantes while trying to flee with them at the motor park en-route Lagos and then outside the country.
The police spokesman, ASP Moses Yamu, who paraded the suspect at the command’s headquarters in Makurdi with 15 others for various crimes committed in different parts of the state, said Lame was arrested based on a tip off.

Yamu said the suspect who is of dual citizenry – Nigeria and Cameroun – specialized in trafficking young women whom he took to Burkina Faso where he resides.

“He was arrested while trying to board a vehicle to Lagos in company of two young girls namely Timia Daasha, 20, from Plateau State and Joy Gideon, 24, from Benue,” the PPRO said.

Speaking with Daily Trust in an interview, the suspect who claimed to hail from Cross River State, admitted that he was nabbed on suspicion of trafficking in humans but denied the allegation.

Lame revealed he has lived in Burkina Faso for one year and eight months as a teacher after graduating from Fidel Polytechnic in Gboko, Benue State. He said he knew one Mr. Simon Averla, a petty trader within the polytechnic.

He said, “I was a student of Fidel Polytechnic, Gboko in the Department of Legal Studies. It was during my stay in the school that I met and became friends with Simon. So we kept in touch and I was communicating with him while in Burkina Faso about job opportunities in that country.”

The suspect maintained that his friend, Simon, became interested in the discussion and offered to release his wife for a sales representatives job and that the woman in turn spread the news to one of her friends, Daasha who was excited to go with him to Burkina Faso.

He said that Simon later declined to let his wife go while Daasha pressured him (Lame) to take her along because she was tired of her aunt’s maltreatment, stressing that he was still considering the woman’s request when they were arrested.